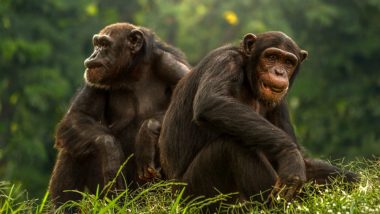 New York, May 16: If you think humans sleep on cleaner beds than other species, think again. According to a study, chimpanzees, our closest evolutionary relatives, keep their sleeping arrangements tidier than us. The finding showed that human being's sheets and mattresses harboured far more bacteria from their bodies than the animals' beds did from their nests.

"About 35 percent of bacteria in human beds stem from our own bodies, including fecal, oral and skin bacteria", said lead author Megan Thoemmes, a doctoral student at the North Carolina State University in the US. On the other hand, the nests of chimpanzees, who make their own beds daily, showed a greater diversity of microbes. Their types of microbial life reflected the arboreal environments where the nests were found, the researchers said.

For the study, published in the journal Royal Society Open Science, the team collected swabs of 41 chimpanzee beds and nests in Tanzania. The swabs were used to test for microbial biodiversity. At 15 of the nests, researchers also used vacuums to sample the diversity of arthropods, such as insects and arachnids.

"We found almost none of those microbes in the chimpanzee nests, which was a little surprising," Thoemmes said, adding "we also expected to see a significant number of arthropod parasites, but we didn't". "There were only four ectoparasites found, across all the nests we looked at. And that's four individual specimens, not four different species," Thoemmes noted.

The results indicate that human's susceptibility to autoimmune diseases and allergies could be linked to these differences. "The study highlights the role that man-made structures play in shaping the ecosystems of our immediate environment. In some ways, our attempts to create a clean environment for ourselves may actually make our surroundings less ideal," Thoemmes said.

(The above story first appeared on LatestLY on May 16, 2018 04:03 PM IST. For more news and updates on politics, world, sports, entertainment and lifestyle, log on to our website latestly.com).