Before the lit-off of Chang'e-5 spacecraft, China's flag was raised from the lander-ascender combination on the moon. 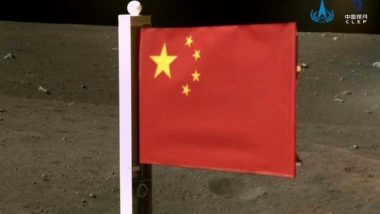 Beijing, December 5: China's Chang'e-5 spacecraft carrying the country's first lunar samples has started its return journey from the moon towards the Earth. Before the lit-off of Chang'e-5 spacecraft, China's flag was raised from the lander-ascender combination on the moon. A picture of the Chinese flag hoisted on the moon was also shared by the China National Space Administration (CNSA).

Launched on November 24, Chinese spacecraft, comprising an orbiter, a lander, an ascender, and a returner, touched down on the north of the Mons Rumker in Oceanus Procellarum, also known as the Ocean of Storms, on the near side of the moon on December 1. After collecting samples from the moon's surface, the ascender of Chang'e-5 took off from on Thursday at 11:10 pm (Beijing Time).

China Hoists Its Flag on Moon Before Chang'e-5 Spacecraft's Take-Off:

This is the first effort to bring samples from the moon in over 40 years. The Chinese spacecraft adopted two methods of moon sampling, including using drills to collect subsurface samples and grabbing samples on the surface with a robotic arm. It gathered diverse samples at different sites, according to a report state-run news agency Xinhua. China Spacecraft Collects Moon Samples to Take Back to Earth.

The ascender is expected to complete the unmanned rendezvous and docking with the orbiter-returner in lunar orbit and the samples will be transferred to the returner, the report said, adding that when the geometric relationship between Earth and the moon is suitable, the orbiter will carry the returner back to Earth.

(The above story first appeared on LatestLY on Dec 05, 2020 10:36 AM IST. For more news and updates on politics, world, sports, entertainment and lifestyle, log on to our website latestly.com).