The dinosaur footprints are reportedly measured as 80 centimetres, and the latest discovery puts Australia in the ‘big league.’ The research has identified them as belonging to the largest meat-eating theropod dinosaur. 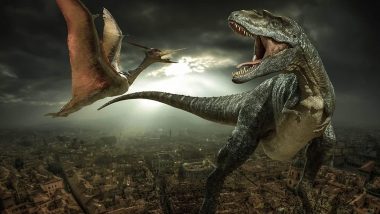 Australia just found its gigantic predatory dinosaurs, which lived during the Jurassic era. Palaeontologists got the evidence which shows the creature was a Queenslander, and according to the researchers, it was a “badass” dinosaur. The discovery was made with the help of footprints in stone, and the fossils are not a recent discovery. The fossils were left for decades in museum drawers, probably waiting to be re-discovered and track down the creatures from Australia’s Jurassic period. The dinosaur footprints are reportedly measured as 80 centimetres, and the latest discovery puts Australia in the ‘big league.’ The research has identified them as belonging to the largest meat-eating theropod dinosaur. Giant 120-Million-Year Old Crocodile That Walked on Two Feet Like a Dinosaur Found by Scientists in South Korea.

The discovery came in by the University of Queensland research, led by palaeontologist Dr Anthony Romilio. The researcher co-published a paper in the peer-reviewed journal Historical Biology, finding Australia’s largest carnivorous dinosaur lived during the Jurassic era. “We have seen the Tyrannosaurus Rex in North America, and large predatory dinosaurs in Africa and South America,” he said in the study. “Turns out ours was in Oakey, and it was a badass dinosaur!” Dr Romilio noted. Explaining the study, he added, “These guys we've got are close to 3 metres tall, something we have not seen in the skeletal fossil remains in this country.” Elaphrosaur, Rare Toothless Dinosaur Discovered by Australian Palaeontologists in Victoria.

Instead of bones, the researchers studied the footprints; the tracks were made by the dinosaurs walking through the swamp-forests that once occupied much of the landscape of what today we call Southern Queensland. The fossils were not a recent discovery. “The tracks have been known for more than half a century,” explained Dr Romilio. “They were discovered in the ceilings of underground coal mines from Rosewood near Ipswich, and Oakey just north of Toowoomba, back in the 1950s and 1960s. Most hadn’t been scientifically described, and were left for decades in museum drawers waiting to be re-discovered,” he adds.

Most of the tracks belong to the theropods, the same group of dinosaurs that include Australovenator, Velociraptor, and their modern-day descendants, birds. They believed to have lived between 165 and 151 million years ago in the Jurassic era.

(The above story first appeared on LatestLY on Jun 18, 2020 10:39 AM IST. For more news and updates on politics, world, sports, entertainment and lifestyle, log on to our website latestly.com).