Look Ahead 2022: From Chandrayaan-3 To Aditya L 1 Mission to The Sun, Here Are India’s Big Ticket Science Missions Planned For The Year 2022

With Omicron variant of Covid pushing up cases again, delays can’t be ruled out this year as well but the new year is a time for new beginnings, new hope, and possibly new launches 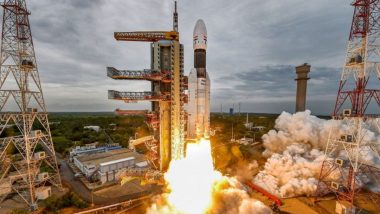 The Indian Space Research Organization (ISRO) is lagging behind in terms of its regular launches due to the pandemic. Many big missions like Aditya L-1, Space Observatory XPoSat and Chandrayaan-3 are stuck. Gaganyaan Is Just the Beginning! India Plans To Have Sustained Human Presence in Space

The year 2022 will be a busy one for the Indian Space Research Organisation (Isro), as it gears up for new missions and also clear the backlog forced by the coronavirus pandemic.

As a part of opening up the space sector, the Indian government constituted the Indian National Space Promotion and Authorization Centre (IN-SPACe) as the sectoral regulator for the private players.

With Omicron strain pushing up Covid cases again, delays can’t be ruled out in 2022 as well but the new year is a time for new beginnings, new hope, and possibly new launches—plenty of them.

Minister of State for Atomic Energy and Space Jitendra Singh had during the recent winter session of Parliament said that India’s maiden human space mission Gaganyaan will now be launched in 2023. The earlier plan was for 2022 but got delayed due to COVID.

The minister later said the test vehicle flight for the validation of crew escape system performance and the first uncrewed mission of Gaganyaan (G1) was scheduled for 2022, which would be followed by a second uncrewed flight at the end of the year.

Here are some of the big ticket launches scheduled for 2022:

After Chandrayaan-2’s failure following a last-minute glitch in the soft landing guidance software, Chandrayaan-3 will be India's third mission to Moon. The earlier mission

It has the same configuration as its predecessor but it will not have an orbiter and only include a lander and rover. The orbiter launched during Chandrayaan-2 will be used for Chandrayaan-3. The spacecraft is planned to be launched sometime during the end of the year.

India’s first space telescope, Astrosat, was designed to study high-energy cosmic objects. ISRO’s second dedicated space science mission will observe the Sun. Launching in 2020 onboard a PSLV-XL rocket, the Aditya-L-1 will study the Sun’s surface and atmosphere, a.k.a. the photosphere and corona, respectively. It will be placed at the first Lagrangian point (L1) between the Sun and Earth, where the dynamic gravitational attraction between these two bodies roughly cancels out.

The test vehicle flight for the validation of crew escape system performance and the first uncrewed mission of Gaganyaan (G1) are scheduled at the beginning of the second half of 2022.

The Gaganyaan programme will be different from other human missions as it will be more cost-effective and inclusive, Singh had told the Rajya Sabha.

For the first time since the country’s Independence, private industry will be involved in space technology. The objective of the Gaganyaan programme is to demonstrate the capability to send humans to low earth orbit (LEO) onboard on Indian Launch Vehicle and bring them back to Earth safely.

Small rocket makers Skyroot Aerospace Private Ltd and Agnikul Cosmos are expected to fly their vehicles by the end of 2022. Satellite-maker Syzygy Space Technologies Pvt Ltd, commonly known as Pixxel, is also expected to fly its satellite sometime next year.  India's Science Missions in 2021: Gaganyaan, Chandrayaan-3 & Others Lined-Up for Outer-Space Exploration and Research

First developmental flight of SSLV was being planned for the first quarter of 2022. SSLV will provide a payload capability of 500 kg to a 500 km planar orbit. SSLV was being primarily developed to realise a cost-effective launch vehicle with a high launch frequency and quick turnaround capability to cater to a growing global market.

Radar Imaging Satellite-1A, or RISAT-1A, is a remote sensing satellite. Developed by Isro, it will be sixth in the series of RISAT satellites, with a configuration similar to that of RISAT-1. It will be a land-based mission with primary application in terrain mapping and analysis of land, ocean and water surface for soil moisture.

With a series of space exploration missions lined up for the upcoming year we hope that a new era will be ushered for space science in 2022.

(The above story first appeared on LatestLY on Dec 30, 2021 05:37 PM IST. For more news and updates on politics, world, sports, entertainment and lifestyle, log on to our website latestly.com).