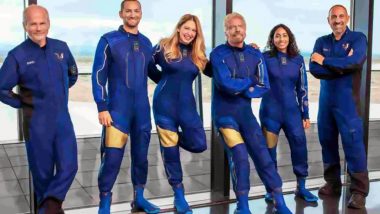 Santa Fe, July 11: Billionaire Richard Branson is all set to fly into space onboard the first fully-crewed spaceflight of Virgin Galactic on Sunday evening. However, Virgin Galactic's "VSS Unity" has been delayed due to bad weather. Richard Branson is among the six crew members on board "VSS Unity". The spaceplane was earlier scheduled for launch at 6:30 pm(IST) on Sunday. It will now takeoff at 8:00 pm IST on Sunday.

The spacecraft will take off from the Spaceport America complex in the US's New Mexico. The spaceflight will have six crew members onboard, including Branson. The mission named "Unity 22" will be the 22nd flight test for VSS Unity. Apart from the UK billionaire, the crew members of VSS Unity include three employees of Virgin Galactic and two pilots. Virgin Galactic's VSS Unity Spaceplane Takes Off Today; Here is All You Need To Know About Richard Branson's Spaceflight.

Indian-origin aeronautical engineer Sirisha Bandla is also a part of the six-member crew. The pilots for this mission are Dave Mackay and Michael Masucci. The other two crew members are - Beth Moses, Virgin Galactic's chief astronaut instructor, Colin Bennett.

According to reports, the carrier aircraft, VMS Eve, will first take off from the runway and will drop VSS Unity after reaching a height of roughly 50,000 feet. Following which the pilots will take over. It is being dubbed as a 'space plane' and is the size of an executive passenger jet. The VSS unity spaceship is expected to take some 90 minutes. While the whole space experience will take around four-five minutes, after which the spaceplane will start its re-entry into the Earth's atmosphere.

(The above story first appeared on LatestLY on Jul 11, 2021 05:40 PM IST. For more news and updates on politics, world, sports, entertainment and lifestyle, log on to our website latestly.com).