SpaceX's First Ocean Spaceport Deimos For the Starship Launch Vehicle Could Be Ready by Next Year, Says Elon Musk

Elon Musk-run SpaceX's first ocean spaceport for the Starship launch vehicle could be ready as soon as next year, the CEO has revealed. 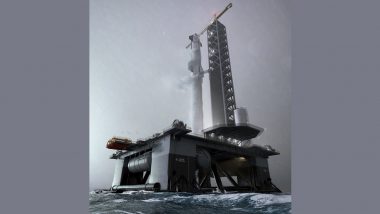 San Francisco, June 1: Elon Musk-run SpaceX's first ocean spaceport for the Starship launch vehicle could be ready as soon as next year, the CEO has revealed.

Musk said Deimos, as the spaceport is called, is currently under construction and that the company could use it to host rocket launches in 2022 in a reply to a render of the structure a fan posted on the social network.

"Ocean spaceport Deimos is under construction for launch next year," Musk wrote on Twitter. China to Send 3 Male Astronauts to Its Space Station in June.

Ocean spaceport Deimos is under construction for launch next year https://t.co/WJQka399c7

The private space corporation purchased two oil rigs last year to transform them into launch pads and landing sites for its next-generation vehicle meant for trips to the Moon and Mars, Engadget reported on Tuesday.

They are appropriately named after the two moons of the red planet -- Phobos and Deimos.

According to NASA Spaceflight, SpaceX moved Phobos to Pascagoula, Mississippi from the Port of Galveston earlier this year so it can be refitted for Starship operations.

Meanwhile, Deimos is under construction at the Port of Brownsville in Texas.

As TechCrunch has mentioned, Musk previously said that one of the two may be operational by the end of 2021.

The executive tends to be a bit optimistic with timelines, though, and it looks like this is one of those times, the report said.

If SpaceX succeeds in getting Deimos ready for launches next year, it'll be the first in what could be multiple floating spaceports around the world where the Starship can launch from, it added.

(The above story first appeared on LatestLY on Jun 01, 2021 07:51 PM IST. For more news and updates on politics, world, sports, entertainment and lifestyle, log on to our website latestly.com).