The spacecraft will arrive at and be attached to the space station two days later. The successful launch today comes after an October 1 attempt was scrubbed at roughly 2 minutes, 40 seconds prior to liftoff mark due to a problem with ground support equipment that has since been resolved. 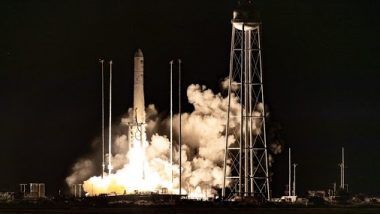 Virginia, October 3: Northrop Grumman's Cygnus spacecraft by the United States, named after astronaut Kalpana Chawla, was launched from NASA's Wallops Flight Facility on October 2. The spacecraft is carrying cargo and supplies to International Space Station (ISS). The American commercial cargo spacecraft bound for the International Space Station has been named after Chawla, who was the first India-born woman to enter space, for her key contributions to human spaceflight. "Northrop Grumman’s Antares rocket carrying the Cygnus cargo spacecraft lifted off at 9:16 p.m. EDT from Virginia Space’s Mid-Atlantic Regional Space Port Pad-0A at NASA’s Wallops Flight Facility in Virginia", NASA said on its website. NASA Plans Moon Landing Mission in 2024 at an Estimated Cost of $28 Billion, All Eyes on US Congress to Approve the First Tranche of Funding.

The S S Kalpana Chawla capsule was launched on the NG-14 mission atop a Northrop Grumman Antares rocket from the Mid-Atlantic Regional Spaceport (MARS) at NASA''s Wallops Flight Facility in Virginia. The spacecraft will arrive at and be attached to the space station two days later. The successful launch today comes after an October 1 attempt was scrubbed at roughly 2 minutes, 40 seconds prior to liftoff mark due to a problem with ground support equipment that has since been resolved.

According to reports, for the NG-14 mission, the Cygnus is on its way to the International Space Station with almost 8,000 pounds of research, crew supplies, and hardware. As per NASA, Cygnus is scheduled to remain at the space station until mid-December, when it will depart the station. Following departure, the Saffire-V experiment will be conducted prior to Cygnus deorbit and disposing of several tons of trash during a fiery re-entry into Earth’s atmosphere approximately two weeks later.

Northrop Grumman is an American global aerospace and defence technology company. It had  announced that its next Cygnus capsule will be named the "S.S. Kalpana Chawla", in memory of the mission specialist who died with her six crewmates aboard the space shuttle Columbia in 2003. "Today we honour Kalpana Chawla, who made history at @NASA as the first female astronaut of Indian descent. Her contributions to human spaceflight have had a lasting impact," the company had tweeted in September. The company said on its website that it is its tradition to name each Cygnus after an individual who has played a pivotal role in human spaceflight.

(The above story first appeared on LatestLY on Oct 03, 2020 08:20 AM IST. For more news and updates on politics, world, sports, entertainment and lifestyle, log on to our website latestly.com).