The auction for the very first tweet by Twitter CEO Jack Dorsey has fetched $2.4 million (a little over Rs 18 crore), which the billionaire would donate in Bitcoins to a charity. T 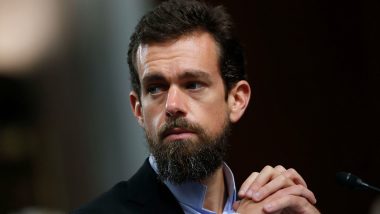 New Delhi, March 22: The auction for the very first tweet by Twitter CEO Jack Dorsey has fetched $2.4 million (a little over Rs 18 crore), which the billionaire would donate in Bitcoins to a charity. The bid for 15-year-old tweet on March 6, 2006 (saying just setting up my twttr') put up for auction as an NFT (non-fungible token) on a platform called Valuables has reportedly been won by Sina Estavi, CEO of tech company Bridge Oracle. Twitter Will Now Allow Users To Watch YouTube Videos Directly in the Home Timeline: Report.

Dorsey had said in an earlier tweet: "Ending this March 21st. Will immediately convert proceeds to #Bitcoin. And send to @GiveDirectly Africa Response".

NFT is a digital good on the Ethereum blockchain. According to Valuables, "What you are purchasing is a digital certificate of the tweet, unique because it has been signed and verified by the creator".

NFTs allow people to buy and sell ownership of unique digital items and keep track of who owns them using the blockchain. The artist Grimes recently sold several NFT items for nearly $6 million. An NFT of LeBron James making a historic dunk for the Lakers garnered more than $200,000.

On March 11, an NFT of a work by digital artist Mike Winkelmann sold for $69 million at Christie's, making him "among the top three most valuable living artists". Non-fungible mean you can't exchange it for another thing of equal value.

(The above story first appeared on LatestLY on Mar 22, 2021 06:11 PM IST. For more news and updates on politics, world, sports, entertainment and lifestyle, log on to our website latestly.com).