2020 in Protests: From 'Black Lives Matter' Stir to Farmers' Agitation, Major Demonstrations in India and Abroad That Made Headlines This Year

2020 saw major protests and agitations in India and other parts of the world. As 2020 comes to an end and the new year 2021 is to begin soon, we listed major protests that took place this year. 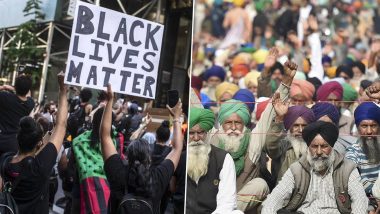 New Delhi, December 20: Major parts of the world had been under a lockdown for months due to the coronavirus (COVID-19) outbreak in the year 2020. Streets were empty, people were restricted to their houses, transport services had remained suspended and governance was hugely hit in 2020; all because of COVID-19. The pandemic, however, could not deter people from protesting when their rights and freedom were under attack. 2020 saw major protests and agitations in India and other parts of the world. As 2020 comes to an end and the new year 2021 is to begin soon, we listed major protests that took place this year.

Central trade unions (CTUs) observed a nationwide general strike or Bharat bandh on January 8 and 9 in protest against "pro-corporate, anti-national and anti-people policies of the BJP-led NDA government". The impact of the strike was restricted to West Bengal where normal life was partially hit as sporadic incidents of vandalism and disruptions were reported.

Protests that broke across India following the passage of the Citizen Amendment Act on December 11 continued in the early months of 2020. The CAA was brought by the Modi government to grant Indian citizenship for Hindus, Buddhists, Parsis, Sikhs and Christians who came to India from Pakistan, Afghanistan and Bangladesh before 2015. But it excludes Muslim immigrants. Anti-CAA protest at Delhi's Shaheen Bagh drew international attention, becoming a symbol of peaceful resistance. But, northeast Delhi saw riots for a week. Over 50 people lost their lives in violent clashes between two communities. Northeastern states Assam, Manipur and Meghalaya also witnessed huge protests against the CAA. Anti-CAA protests were called off in March as major parts of the country went under lockdown due to the COVID-19 lockdown. Why Citizenship Amendment Act+NRC Raise Fear And Concerns: A Multi-Dimensional Take.

Major protests broke out in parts of India after four men from the upper caste community allegedly raped a 20-year-old Dalit woman in Uttar Pradesh's Hathras on September 14. She later died due to her injuries at a hospital in Delhi. The victim was cremated near her home on September 30. The police's handling of the case - particularly the late-night cremation of the victim allegedly without the family's approval - led to angry protests across the country. The Central Bureau of Investigation (CBI) later took over the investigation.

Thousands of farmers, mainly from Punjab and Haryana, arrived at the entry points to Delhi in late November and have been protesting there since then against the Centre's farm laws. The protesting farmers reached Delhi borders braving tear-gas shells, water cannons and police barricades at several places in Haryana. They have been protesting for the past 25 days against the farm laws. A nationwide shutdown or Bharat bandh was also observed on December 8 against the farm laws. More than a dozen political parties extended support to farmers' Bharat bandh call.

Violent and peaceful protests erupted in several parts of the United States against police brutality on people of colour and the killing of African-American George Floyd in Minneapolis in May. Visuals showing a white policeman pressing his knee on George Floyd's neck for at least seven minutes despite the 46-year-old gasping for breath and repeatedly saying "I can’t breathe", ignited anti-racial protests in several other countries as well. Protesters chanted "Black Lives Matter" and called for an end to police brutality and injustice based on race and colour. Who Was George Floyd? Why Was He Detained? Here's Why the Death of the 46-Year-Old African-American in Minneapolis Sparked Violent Protests in US.

In June, Hong Kong witnessed demonstrations which were called to mark the one-year anniversary of the agitation against a bill proposing extraditions to mainland China. That protest grew into a pro-democracy movement and sparked seven months of protests against Beijing's rule. This year too, protesters defied a ban on gatherings and staged demonstrations in Hong Kong. The Extradition Bill allowed criminal suspects in Hong Kong to be extradited to mainland China and tried in Communist Party courts. Protesters are of the view that the law would destroy the civil liberties that Hong Kong residents enjoy under the "one country, two systems" agreement put in place when the United Kingdom handed the territory back to China in 1997. Hong Kong Protests: 53 Arrested as the Country Marks First Anniversary of Pro-Democracy Protests.

Protests have been going on in Thailand since early. Beginning first as demonstrations against the government of Prime Minister Prayut Chan-o-cha, the stir has since included the unprecedented demands for reform of the Thai monarchy. The first wave of protests was held exclusively on academic campuses and ended due to the COVID-19 pandemic. Protests resumed again on 18 July and continue. The agitators want the dissolution of parliament, ending intimidation of the people, and a new constitution. Violent clashes between the protesters and the police and royalists have become more prevalent.

Pakistan is seeing a political turmoil with the rise of Pakistan Democratic Movement (PDM) against the Imran Khan government. The PDM is a coalition of 11 opposition parties. Headed by Maulana Fazal-ur-Rehman, the leader of the Jamiat Ulema-e-Islam (F), the PDM has the backing of two parties who have previously led Pakistani politics, Nawaz Sharif's Pakistan Muslim League (N) and the Pakistan Peoples Party. The PDM is holding major protests in main parts of the country, challenging the Imran Khan government and the Pakistani Army. The full-blown war between the political parties has only deepened the crisis in Pakistan which had seen political instability and army rule for several decades.

In short, the year 2020 was full of uprising and agitations in many parts of the world despite the coronavirus-induced lockdown. As the new year 2021 is about to knock, let's hope peace and justice prevail in every nook and corner, and we get to see life freer and better.

(The above story first appeared on LatestLY on Dec 20, 2020 03:38 PM IST. For more news and updates on politics, world, sports, entertainment and lifestyle, log on to our website latestly.com).