Granting citizenship to refugees who left their native countries due to religious persecution is a welcome step, but the government appears to have different motives behind the CAA and the NRC. The constitutional validity of the Citizenship Amendment Act is already in question. Besides, there are state-specific concerns as well as community related doubts left unaddressed. 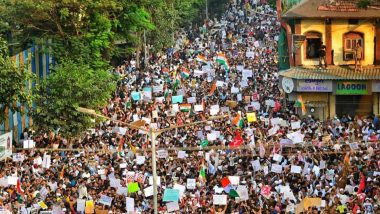 Protests have erupted in major parts of India against the newly-passed Citizenship Amendment Act (CAA) and the proposed preparation of the National Register of Citizens (NRC). The Citizenship Amendment Act gives Indian nationality to undocumented Hindu, Sikh, Parsi, Buddhist and Christian immigrants from Pakistan, Bangladesh and Afghanistan. Granting citizenship to refugees who left their native countries due to religious persecution is a welcome step, but the government appears to have different motives behind the CAA and the NRC. The constitutional validity of the Citizenship Amendment Act is already in question. Besides, there are community-specific and state-specific concerns as well because the Act leaves out Muslims and have the potential to change the demography of bordering areas. CAB Passage Jolts Northeast: Why Assam and Neighbouring States Are Up in Protest Against Citizenship Amendment Bill.

But by openly stating that non-Muslims (Hindus, Buddhists, Sikhs, Parsis and Christians) facing "persecution" in Afghanistan, Pakistan and Bangladesh who have entered India on or before December 31, 2014, will not be considered illegal immigrants, the CAA clearly discriminates against Muslims.

Home Minister Amit Shah's argument that Muslims have not been made part of the scheme because they are not a minority in Afghanistan, Pakistan and Bangladesh rings hollow due to the non-inclusion of Tamils from Sri Lanka and Rohingyas from Myanmar, apart from other questions left unanswered. If the protests are anything to go by, not just Muslims but concerned citizens from every section of society are opposing the Citizenship bill along with the National Register of Citizens (NRC). The BJP has time and again reiterated that it will implement the NRC across India. However, its definition of sharnarthi (refugee) and ghuspaithiye (infiltrator) remains ambiguous as ever.

The haphazard implementation of the NRC in Assam is just one reason why it has faced such vocal revolt. The Modi government that promised of ' Minimum Government, Maximum Governance' surely owes an answer to the people of this country on new laws and acts which seems aimed at not only changing the secular fabric of the country, but is also blatantly discriminatory.

For Muslims, it is an existential crisis: Aadil Ikram From Maharashtra

For Indian Muslims, it is vivid that the current government doesn’t care about them. Indian Muslims, if fail to prove citizenship during the soon-to-be-implemented NRC exercise, have no protection under the Citizenship Amendment Act. My great grandfather was born in India. But I or my 20-year-old sister or 13-year-old brother or parents or any other relative fail to provide documentation, we are likely to end up in detention centres. If the idea is to clean India from intruders, all illegal immigrants need to go. And if the idea is to give shelter to persecuted communities, then it shouldn’t be selective either. CAA Protests: 'Those Born Before 1987 or Whose Parents Are Born Before 1987 Are Indians', Says Government.

The CAA is bigoted and doesn’t uphold the core values of the Constitution. My ancestor chose India, a secular state, during the partition. But today, my patriotism and citizenship are being questioned.

Citizenship Amendment Act is a mockery of Assam Accord: Madhurima Sarkar From Assam

Assam’s concern is loud and clear—they do not want illegal immigrants in their state, under any circumstance. For long, the northeastern state of India has experienced strong anti-outsider sentiment, then the rest of India. It has faced illegal migration in massive scale giving rise to intense existential fear and apprehension among its smaller indigenous communities. It is not faith, but the settlement of non-Assamese immigrants if granted citizenship in their region would unfavourably shift their demographic balance. One of the reasons that the BJP won the majority of votes in Assam was because they campaigned that the illegal immigrants would be identified and thrown out of state with the help of NRC. CAA Protest: RSS to Start Door-to-Door Campaign to Explain Citizenship Amendment Act.

The Sarbananda Sonowal government was evidently all for NRC until August this year, when the closure of the initial count led to the announcement that among 1.9 million netted by the exercise was a large number of non-Muslims. Post the announcement, people who could not make it to the list was supposed to get the reason, so that they can appeal to the Foreigners Tribunal Court. But none of that happened, and the Indian government instead came up with CAA, which resulted in a massive protest. The Act is also a mockery to the Assam Accord which was signed in 1985 between the centre and the state. The accord put the date of detection and deportation of foreigners (Bangladeshis) as of March 26, 1971. CAA also nullifies the Assam Agitation 1979-85, an honorary movement in which more than 800 people sacrificed their lives in the hope of an Infiltration free Assam.

Above all, who will give employment to these illegal immigrants? Does the government have any measure to curb the unemployment that we are facing today? The centre has majorly ignored the northeastern states, since one can remember. Assam, as compared to the rest of India, has the worst economy. The state is the largest tea producer in India, and tea planters are currently facing an economic slowdown due to various reasons. Are we ever going to address these significant issues? Or making bigotry decisions is utmost important? The Indian government repeatedly ensured that CAA would not take away the pride of Assamese culture. I wonder, how!

The original Citizenship Act of 1955 has been amended 6 times but never before on religious grounds as it was on December 9, 2019. But that’s a story for another day. What has gripped West Bengal most is fear of proving its citizenship to a central government that, aided by a religiously dominant Nationalist organisation, is adamant in creating a country of its will, nature, beliefs and ideologies. Introduce the NRC (National Register of Citizens in India). First implemented (as an experiment for the rest of India), the NRC claimed at least 20 lives in Bengal without even touching its secular shores. In Assam 19 lakh people were left stateless. The move had backfired. It was fatal, Calamitous and end of the Gandhian India. But the BJP, unwavering in its ambition of alluring Bengal – perhaps this country’s most emotionally sensitive state – to its agenda, reacted fast. I&B Ministry Issues Advisory for News Channels Amid Anti-CAA Protests, Reiterates 'Not to Broadcast Content That Can Instigate Violence'.

Bring on the Citizenship Amendment Bill. A relief for all Hindus but also for Sikhs, Buddhists, Christians, Jains, Parsis and Christians – cherries on a cake. But Muslims missed out and Bengal, fourth most populated state in India, houses 2.46 crores of Muslims. That again is for another day. The government is yet to impose both CAB & NRC in any state but the blow of NRC trumpet resulted in people of Bengal streaming into government offices for procuring documents that would yell – We are Indians.

Those that lined-up outside government office were perhaps lucky or unlucky. But those that couldn’t, were worse. My maternal grandmother, born in India and a voter in this country has no birth certificate, no lineage certificate but voter ID and Aadhaar card, which unsurprisingly until two months ago served herself as a citizen of India. Her daughter comes with a similar problem. Both born, brought up and belonging to India. I have my birth certificate but by virtue of law, which commands both parents to have legal citizenship documents, I too fall on the wrong side.

(Disclaimer: Aadil Ikram, Abhishek Yadav, Madhurima Sarkar and Joseph Biswas work at Latestly’s Mumbai office. The views expressed here are those of the authors and do not necessarily represent or reflect the views of LatestLY.)

(The above story first appeared on LatestLY on Dec 21, 2019 10:01 PM IST. For more news and updates on politics, world, sports, entertainment and lifestyle, log on to our website latestly.com).