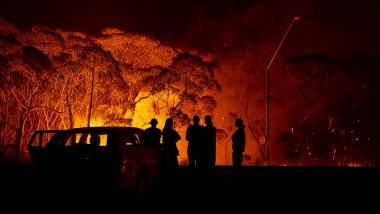 A statement released by the Sequoia National Park on Saturday said the KNP Complex reached the Four Guardsmen in the Giant Forest. The Giant Forest is the home for over 2,000 giant sequoias, including the General Sherman Tree - the world's largest tree by volume, Xinhua news agency reported. The Four Guardsmen is a colonnade of four giant sequoias located near the south gate of the forest. California Forest Fire: Dixie Fire in Northern California Grows to Become Largest Wildfire in 2021.

But the statement added that "fuel removal efforts by firefighters, combined with structure wrap applied by crews to the base of the iconic sequoia trees, successfully protected these national treasures."

The blazes swirling around California's giant sequoia trees prompted more evacuations Sunday as they spread toward communities surrounding the forests, while the authority warned that the fires would remain active throughout the night.

The historic sequoia trees in Sierra Nevada mountains, which are thousands of years old and grew to be hundreds of feet tall, were increasingly threatened by drought, climate change and extreme fire. Last year, the Castle Fire wiped out 10 per cent of the world's native sequoias, according to the National Park Service.

(The above story first appeared on LatestLY on Sep 20, 2021 08:54 AM IST. For more news and updates on politics, world, sports, entertainment and lifestyle, log on to our website latestly.com).