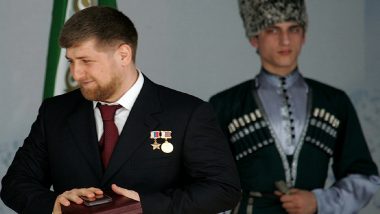 Moscow, May 24: Chechen President Ramzan Kadyrov has released a video calling for divine help in overcoming the pandemic after Russian media reported he had been hospitalised for suspected COVID-19 symptoms.

But the video, posted Saturday on the Telegram messaging app and marking the end of the Muslim fasting month of Ramzan, does not show Kadyrov and uses only his voice, Russian news reports said. Chechen Strongman Makes Egypt's Salah Honorary Citizen.