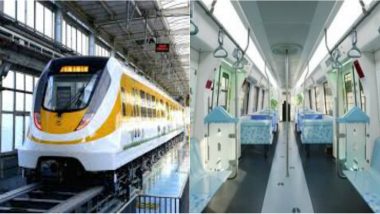 The train, with a maximum operational speed of 120 km per hour, will be deployed on a tourist route in Qingyuan City, south China's Guangdong Province, according to the company.

Powered by the maglev technology, the train features a strong climbing capacity, a short turning radius, and low noise, said Ren Zhonghua, a senior engineer with the company.

The three-car train can carry up to 500 passengers on a single trip.

With a relatively low cost and short construction period, the middle-to-low-speed maglev system is suitable for city commutes, as well as travel to nearby cities and tourist destinations.

(The above story first appeared on LatestLY on Dec 16, 2020 12:47 PM IST. For more news and updates on politics, world, sports, entertainment and lifestyle, log on to our website latestly.com).