Donald Trump Advises Greta Thunberg to 'Work on Her Anger Management Problem', TIME's 2019 Person of the Year Replies to US President in Style 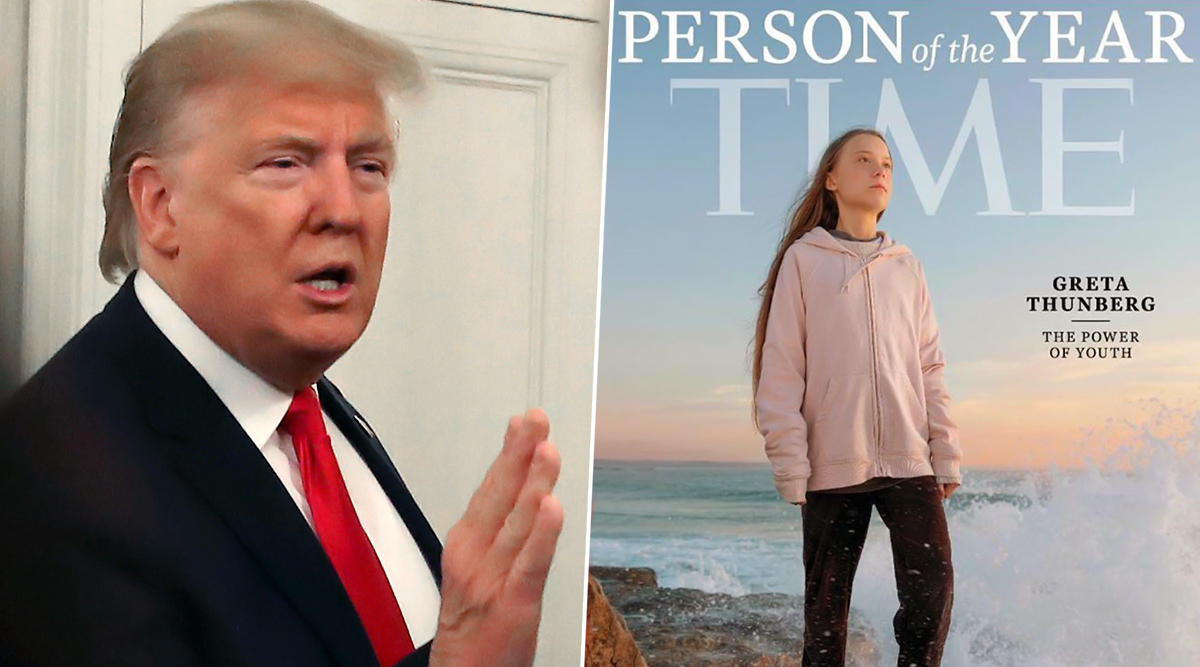 Washington, December 12: US President Donald Trump on Thursday in a hostile tweet adviced Time magazine's person of the year Greta Thunberg to work on her "anger management problem" and advised her to "chill" as well as go to see a movie. Activist Greta Thunberg replied to President Trump's tweet by changing her bio on Twitter which read, "A teenager working on her anger management problem." The US President was also brutally trolled for his distasteful tweet and Twitterati called the President a "bully" for his tweet on the 16-year-old climate activist. TIME Magazine's 2019 Person of The Year's Name Announced: Greta Thunberg, 16-Year-Old Swedish Environmental Activist, Featured on Iconic Cover.

“So ridiculous. Greta must work on her Anger Management problem, then go to a good old fashioned movie with a friend! Chill Greta, Chill!” he tweeted. The President's Tweet came in a retweet reply to a congratulatory message tweeted by author Roma Downey wishing the teenager on winning the coveted title.

So ridiculous. Greta must work on her Anger Management problem, then go to a good old fashioned movie with a friend! Chill Greta, Chill! https://t.co/M8ZtS8okzE

Not the one to be left behind, Greta Thenberg replied by changing her Twitter bio. The new Twitter bio of the famous activist after Trump's tweet reads, "A teenager working on her anger management problem. Currently chilling and watching a good old fashioned movie with a friend."

New bio after the president’s tweet about her: pic.twitter.com/t4tSzNE0PH

The US President was also trolled for his tweet and was called a "bully" and a "sociopath" for his hostile tweet. Various users came to the support of the activist and replied angrily to Donald Trump's tweet.

Greta must work on her anger management problem? Are you serious? I can’t believe Trump is this petty, dumb, and blackhearted to bully a 16-year-old kid out of pure jealousy that she made the cover of Time Magazine for Person of the Year over him. Trump needs to deal with it.

Some Wished the Impeachment Happened Soon

Nothing like going after a young girl with Asperger Syndrome to drive home the point that you are fit for office.#BeBest my ass.

The young climate activist gained prominence and shot to fame in 2018 after her impassioned speech at the United Nations in 2019, garnering support to fight climate change. She also protested alone outside the Swedish parliament during school hours on Fridays when she was only 15.

Time magazine's editor-in-chief Edward Felsenthal, speaking about the magazine naming the young activist as person of the year, told TODAY that, "She became the biggest voice on the biggest issue facing the planet this year, coming from essentially nowhere to lead a worldwide movement." Thunberg shared her image on Time magazine's cover and said that it was "unbelievable". "Wow, this is unbelievable! I share this great honour with everyone in the #FridaysForFuture movement and climate activists everywhere," she tweeted in gratitude.