Bengali New Year 2018: This Poila Boishakh, Bangladesh PM Will Not Have Hilsa, to Eat Dried Fish

In order to save the country's national fish Hilsa, during its breeding season, Prime Minister of Bangladesh Sheikh Hasina this year has decided to eat rice soaked in water (panta bhaat) and dried fish mash (Shutki bhorta) on the first day Bengali New Year. 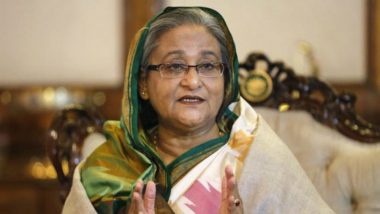 Dhaka, April 13: The Bangladesh Prime Minister Seikh Hasina has decided to celebrate the Bengali new year by dedicating the day to a good cause. The Prime Minister has said that this year she has decided to eat rice soaked in water (panta bhaat) and dried fish mash (Shutki bhorta) on the first day Bengali New Year instead of the eating the national fish Hilsa, as is the norm. She is doing this as it is breeding season of the fish.

According to the Dhaka Tribune, Sheikh Hasina decided to take this initiative after she received an invitation for the New Year celebrations from women residing in Rangpur district. "I will eat panta bhat on Pohela Boishakh (first day of Bengali new year). But with shutki bhorta, not ilish," Dhaka Tribune quoted Sheikh Hasina as saying.

Bengali New Year, 1425, is celebrated with fervour across Bangladesh and across the world. For the last two years, she has been urging people to stop catching Hilsa fish in order to ensure growth in population of this fish.

"I am requesting all of you not to eat ilish to celebrate the Bangla New Year. Do not eat ilish, and discourage ilish fishing," Dhaka Tribune further quoted Sheikh Hasina as saying. Every year starting from March 1, Bangladesh imposes a two-month ban on catching Hilsa in several southern districts to help boost their population. (With Agency Inputs)

(The above story first appeared on LatestLY on Apr 13, 2018 05:31 AM IST. For more news and updates on politics, world, sports, entertainment and lifestyle, log on to our website latestly.com).