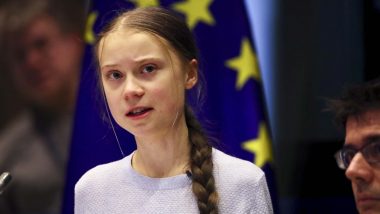 Stockholm, February 4: Climate activist Greta Thunberg on Thursday once again extended support to farmers protesting against the three farm laws enacted by the Narendra Modi government last year. The climate activist said that no amount of hate or human rights violation could change her opinion.  Delhi Police Files FIR Against Greta Thunberg For Her Tweet on Farmers' Protests.

In her latest tweet, Greta Thunberg said, "I still #StandWithFarmers and support their peaceful protest. No amount of hate, threats or violations of human rights will ever change that. #FarmersProtest." Thunberg's tweet came moments after reported surfaced that Delhi police lodged an FIR against the climate activist over her tweet on farmers' protest on Tuesday night.

I still #StandWithFarmers and support their peaceful protest.

No amount of hate, threats or violations of human rights will ever change that. #FarmersProtest

However, Delhi clarified that Thunberg was not named in the FIR and the case was registered only against the creators of the toolkit for protest shared by the activist.   In the FIR, the Delhi police charged creators of the toolkit with Section 153A (promoting enmity between different groups on the grounds of religion, race) and Section 120B (criminal conspiracy). Thunberg extended support to protesting farmers in India after pop singer Rihanna expressed solidarity towards the farmers' agitation.

The Swedish on Wednesday night tweeted an updated Google document toolkit on social media for the farmer protests in India. She deleted the first toolkit shared by her on Tuesday night after backlash. The toolkit shared by Thunberg indicates that a widespread campaign may have been on much before January 26.

After comments made by Rihanna and Thunberg, the Ministry of External Affairs issued a statement called it "unfortunate". The MEA in a statement said, ", it is unfortunate to see vested interest groups trying to enforce their agenda on these protests, and derail them. This was egregiously witnessed on January 26, India's Republic Day."

Farmers, especially from Punjab and Haryana, have been protesting against the farm laws since November 26. They are demanding that the Modi government should repeal the fam laws. However, the Centre offered only to amend these laws. Till now, 11 rounds of meting have taken place between the union ministers and farmers' representatives. However, these meetings remained inconclusive. Farmers also took out tractor rally on January 26 in the national capital against the laws.

(The above story first appeared on LatestLY on Feb 04, 2021 05:26 PM IST. For more news and updates on politics, world, sports, entertainment and lifestyle, log on to our website latestly.com).