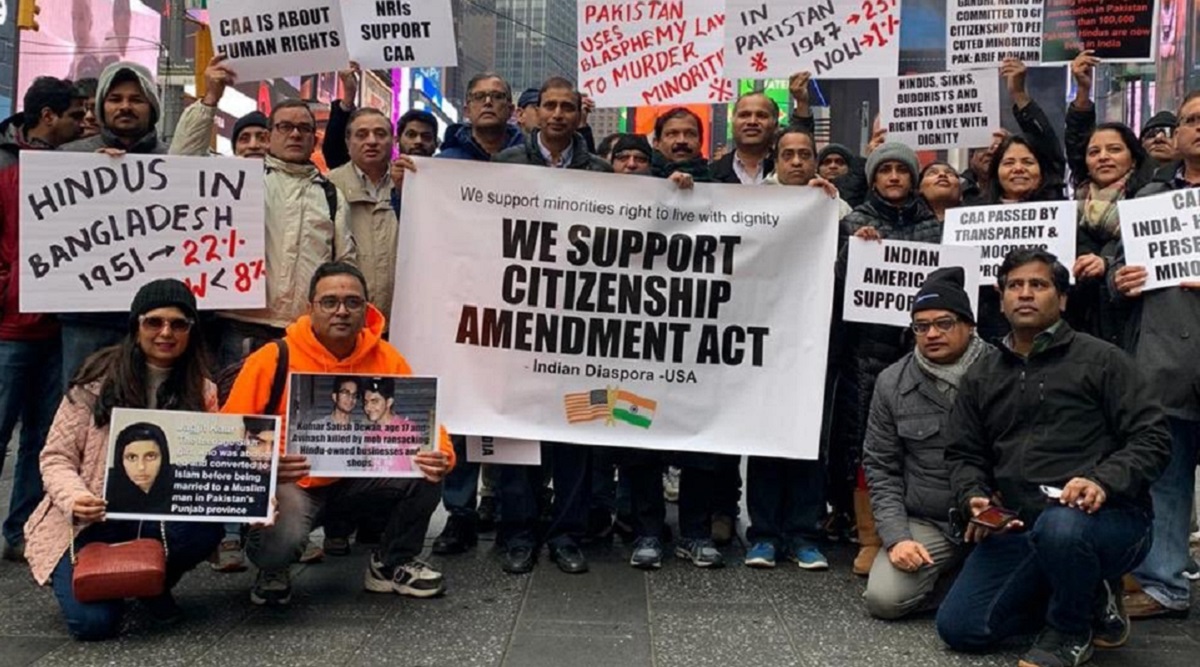 New York, December 30: Members of the Indian diaspora held events at different places here to express their support for the amended Citizenship Act, terming it as a historic step taken by the Indian government. According to the Citizenship Amendment Act (CAA), members of Hindu, Sikh, Buddhist, Jain, Parsi and Christian communities who have come from Pakistan, Bangladesh and Afghanistan till December 31, 2014 following religious persecution there will get Indian citizenship.

A group of Indian-Americans gathered at Times Square on Sunday, carrying placards and raising slogans in support of the Narendra Modi government and CAA. The placards read “CAA is about human rights”, “We support minorities' right to live with dignity”, “NRIs support CAA” and “CAA passed by transparent and democratic process.” CAA Protest: RSS to Start Door-to-Door Campaign to Explain Citizenship Amendment Act.

They raised slogans such as “We support Modi” and “We support CAA.” Attending the support rally was President of Overseas Friends of BJP-USA (OFBJP) Krishna Reddy Anugula and others members of the organization.

In Long Island, an event was organized on Saturday where members of the Indian-American community expressed their support for the new law.

Jagdish Sewhani, President of the American India Public Affairs Committee, said the law is a historic decision taken after the Narendra Modi government was voted back to power with an overwhelming majority. Sewhani also lauded the Modi government's decision to abrogate Article 370 of the Constitution on August 5 to revoke the special status given to Jammu and Kashmir.

“This act of humanitarianism should have been done years before. But because of pseudo-secularism and vote bank politics, these refugees were forced to live an inhuman life in India. Now CAA gives them an opportunity to have a dignified life in India,” he said. He said the Indian-American community must reach out to Congressmen, Senators and elected representatives in the US to inform them about CAA.