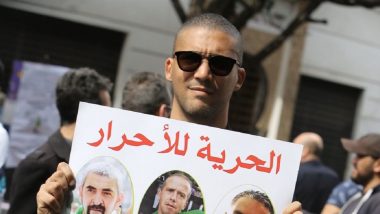 Algiers, August 10: Algerian journalist Khaled Drareni, who was arrested in March this year for covering a demonstration against the government in the national capital, was convicted by a court in Algiers on Monday. He was sentenced to three years in prison for his "anti-national" reporting and attempt to incite violence.

Drareni, hailed as a "press freedom icon" among the country's intelligentsia and activists, appeared before the court via video-conferencing from the prison where he is currently lodged. The bench, which had concluded the hearings earlier this week, spelled out its judgement, as soon as the court resumed. Is France Helping Lebanon, or Trying to Reconquer It?

The 40-year-old scribe was charged with "inciting an unarmed gathering" and undermining the nation's "territorial integrity". Casbah Tribune, the website for which Drareni reported, is expected to challenge the verdict in the higher court.

Reporters Without Borders (RSF), the transnational organisation of journalists of which Drareni is a member, has condemned his "persecution" by the Algerian regime. The group has appealed President Abdelmadjid Tebboune to drop the case against Drareni as it amounts to an assault on the freedom of speech and expression.

The RSF, in a statement issued in the past week, said Drareni had only exercised his right to inform the Algerian readers by covering the protest. The demonstrations, as part of the "Harik" movement, are underway in Algeria since the past year seeking enhanced democratic and political rights for the people.

Since Drareni had also reported for the notable French media network TV5Monde, a section of activists in Algeria are also hopeful of intervention in the case by the Emmanuel Macron government.

The case of Drareni also points towards the alleged dwindling press freedom in Algeria. The North African nation ranks at the 146th spot in the list of 180 countries prepared by the RSP, based on the index of press freedom.

(The above story first appeared on LatestLY on Aug 10, 2020 03:39 PM IST. For more news and updates on politics, world, sports, entertainment and lifestyle, log on to our website latestly.com).