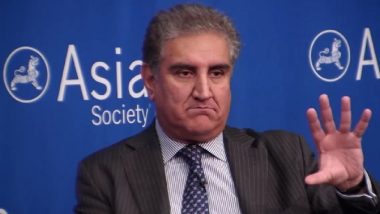 Commenting about India-Pakistan relations, Qureshi said that it is Pakistan's firm belief that "all issues could be resolved through dialogue", adding that it is India's responsibility to create a conducive environment. "Pakistan has a clear stance on trade with India. It's now India's turn to make the environment conducive for dialogue," he said. Pakistan FM Shah Mahmood Qureshi Threatens India of Retaliation Amid LoC Tensions.

Saying that Pakistan had "serious concerns" about the in situation Jammu and Kashmir, Qureshi said, "The people of Kashmir and different political parties had already rejected the Indian government's decision of August 5, 2019."

Qureshi's statement comes at a time when the Imran Khan-led government in Pakistan took a U-turn on its decision to open trade with India, summary of which was later rejected in the cabinet meeting, which reiterated that there can be no trade with India until it reverses its decision of August 5, 2019, which changed the special status of the erstwhile state of Jammu and Kashmir and bifurcated it into two Union Territories, by abrogating Articles 370 and 35A.

While the Pakistan government maintains that its position on Kashmir cannot change, opposition benches have raised serious questions on the government's intentions and competency in taking major decisions related to the country's foreign policy.

Moreover, questions have also been raised over the country's foreign policy and approach after it was ignored by the US for a recent environment conference. Qureshi, however, maintained that invitations to the conference were only extended to countries, which were creating pollution.

"The US government had invited only those countries, which were creating pollution. Prime Minister Imran Khan is a role model for developing countries regarding his efforts to control global warming and environmental pollution," he said.

"I wrote a letter to the special envoy to the Joe Biden administration and former Secretary of State of America, in which I have conveyed that Pakistan and America have the same policy on environment and both countries can work together on the issue," Qureshi added.

(The above story first appeared on LatestLY on Apr 06, 2021 07:43 PM IST. For more news and updates on politics, world, sports, entertainment and lifestyle, log on to our website latestly.com).