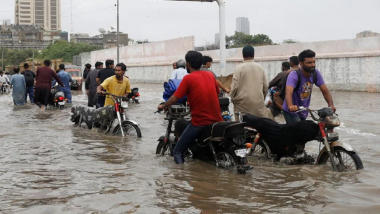 Islamabad, August 17: The monsoon rain in Pakistan have caused massive damages in different parts of the country, with Balochistan province being the worst-hit. "The devastating monsoon rains and accompanying deluges have wrecked havoc in Balochistan causing massive human and infrastructure losses," said an official of the Balochistan provincial government.

"The province now requires at least 35 billion PKR for damage recovery and rehabilitation," he added. As per details shared by the Provincial Disaster Management Authority (PDMA), at least 196 people -- 96 men, 45 women, 55 children -- have lost their lives till now. "The heavy rain caused a loss of over 500,000 livestock and damaged crops on 198,461 acres of farmland in Balochistan," said the PDMA. Pakistan Floods: Cloudburst in Islamabad Causes Flooding; Videos of Cars Floating in Water Surface on Internet.

Entire districts are flooded by the monsoon rains in Pakistan putting lives and livelihoods of hundreds of people at risk. The state should fulfil its duty towards its people & prepare for the ongoing climate catastrophe. #ClimateChangeisHEREpic.twitter.com/vGbaX7E73V

"A total of 21,027 houses were damaged or destroyed by the rain-induced floods. Eight highways measuring about 960 km and 18 bridges were also damaged. Tube wells, solar panels and other forms of communications are badly damaged by the rain."

Moreover, at least 25 small dams were washed away while many link roads were completely destroyed. Balochistan Chief Minister Abdul Quddus Bizenjo has said that his government is putting in all efforts for relief, rescue and rehabilitation, urging that the support of federal government was pivotal for speedy efforts.

"The cooperation of the federal government for the relief and rehabilitation operation is very important as the Prime Minister has personally visited the affected districts and reviewed the prevailing situation," he said.

But locals are not happy with the ongoing relief, rescue and rehabilitation efforts and blame the government for not taking pre-emptive measures despite intimation by the Pakistan Meteorological Department. With more spells being forecast for the coming days, Balochistan province along with many parts of Punjab are bracing for more devastation and destruction.

(The above story first appeared on LatestLY on Aug 17, 2022 10:02 PM IST. For more news and updates on politics, world, sports, entertainment and lifestyle, log on to our website latestly.com).