Pakistan: 'Reham Khan Was Paid To Write Book Against Me in 2018', Says Former PM Imran Khan

The former Pak premier referred to the book in an indirect way for the first time since its publication and that too at a public gathering in Multan. 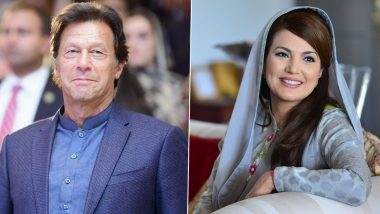 Islamabad, April 30: Former Pakistan Prime Minister Imran Khan on Friday alleged that the Sharif family "paid a woman" -- a tacit reference to his ex-wife Reham Khan -- to write a book against him during the 2018 general elections, saying the "mafia" is once again gearing up for his character assassination and might release something after Eid, Express Tribune reported.

The former Pak premier referred to the book in an indirect way for the first time since its publication and that too at a public gathering in Multan. Pakistan Army Chief General Qamar Javed Bajwa, Bill Gates Discuss Polio and COVID-19 Situation in the Country.

At the rally, he also spoke about his first ex-wife Jemima Goldsmith, saying she had to go through court cases and face allegations of being a member of the Jewish lobby by the "Sharif mafia".

Reham Khan had written a controversial memoir just a few days before the 2018 elections. Though it was claimed back then that the publication was intended to damage Imran's electoral prospects, he still became the Prime Minister of the country in 2018 and was recently voted out of power through a no-confidence vote in the National Assembly.

"They are the people who paid a woman to write a book against me in the 2018 elections. They will once again go for my character assassination after Eid. For them I have a message... I will fight against them as long as I am alive," Imran said.

Apart from talking about his former wives, Imran also accused incumbent Prime Minister Shehbaz Sharif of ordering the most number of encounters during his tenure as the Punjab Chief Minister.

Shedding light on how "mafias" were working for the last three decades, he said that they threaten and pressure people to make things done. He, however, said that he would continue speaking against the "mafias".

(The above story first appeared on LatestLY on Apr 30, 2022 09:33 PM IST. For more news and updates on politics, world, sports, entertainment and lifestyle, log on to our website latestly.com).