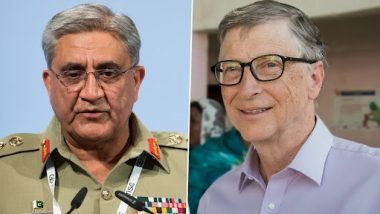 The army chief responded that polio eradication was a national cause, adding that "credit goes to all involved in the process". Gates also appreciated Pakistan's success in combating the pandemic despite resource constraints.

For his part, Bajwa attributed it to a "true national response" executed through the National Command and Operation Centre (NCOC). The COAS appreciated Gates' efforts towards polio eradication and the Covid response and assured the philanthropist of continued cooperation, according to the statement.

Earlier this year, Gates had visited Pakistan for the first time and held meetings with the then-prime minister, the president and other national and provincial leaders. He had also attended a luncheon and a ceremony to confer on him one of the country's highest civil awards.

President Arif Alvi had conferred the Hilal-i-Pakistan on Gates in recognition of his philanthropic services for humanity, eradication of polio and betterment of the people of Pakistan.

(The above story first appeared on LatestLY on Apr 30, 2022 04:25 PM IST. For more news and updates on politics, world, sports, entertainment and lifestyle, log on to our website latestly.com).