Russia-Ukraine War: Mobile Users in US Get Spam Texts From Own Numbers Amid Cyberattack Alert From Russia-Backed Hackers

In some users' case, the spam link forwarded them to Channel One Russia, a Russian state media network, reports The Verge. 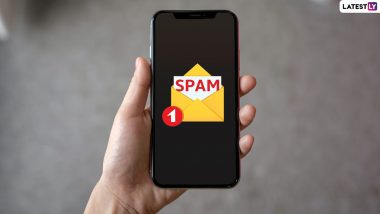 San Francisco, March 30: In a bizarre incident, thousands of mobile users in the US received spam texts from their own phone numbers, and leading telecom carrier Verizon Wireless now say there are "bad actors" behind the spam.

In some users' case, the spam link forwarded them to Channel One Russia, a Russian state media network, reports The Verge.

Verizon, however, said "we have no indication that this fraudulent activity is originating in Russia." RRB NTPC Revised Result 2021-22 Declared: Here's How To Download Score Card.

"Verizon is aware that bad actors are sending spam text messages to some customers which appear to come from the customers' own number," a Verizon spokesperson told The Verge late on Tuesday.

"Our team is actively working to block these messages, and we have engaged with US law enforcement to identify and stop the source of this fraudulent activity," the company added.

The spam texts appeared as US companies are on high cyber-security attack alert from Russia-backed hackers over the severe US sanctions.

"We believe this activity is being generated from external bad actors with no direct tie to our company," according to Verizon.

Last week, US President Joe Biden said that the intelligence indicated a growing Russian cyber threat to the US.

He said Russia was "exploring" cyber attacks, but the US would use "every tool" to prevent and respond to such a move.

Moscow could act in retaliation for sanctions imposed on it after Russia's invasion of Ukraine.

Biden had previously warned of a possible cyber attack from Russia.

(The above story first appeared on LatestLY on Mar 30, 2022 02:04 PM IST. For more news and updates on politics, world, sports, entertainment and lifestyle, log on to our website latestly.com).