A White House spokesperson earlier said Biden looked forward to working with President-elect Yoon to further expand their countries' close cooperation. Biden reaffirmed the US' commitment to the defense of South Korea, according to the White House. 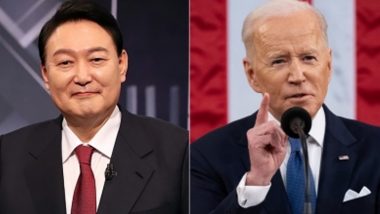 Biden called Yoon on Thursday after the the opposition leader was declared the winner in the South Korean presidential election, reports Yonhap News Agency. In a statement, the White House said that Biden and Yoon affirmed the strength of the alliance between the two nations, "which is the linchpin for peace, security and prosperity in the Indo-Pacific".

"The two also committed to maintain close coordination on addressing the threats posed by the Democratic People's Republic of Korea's nuclear and missile programs," it said of his call with Yoon. Biden was the first foreign leader to personally congratulate Yoon on his election, according to the latter's aides.

Political watchers believe Biden may also become one of the first foreign leaders to hold a summit with Yoon as he is expected to embark on an Asia trip in late May for a Quad summit. Yoon, a former prosecutor general, is set to take office on May 10.

(The above story first appeared on LatestLY on Mar 10, 2022 11:14 AM IST. For more news and updates on politics, world, sports, entertainment and lifestyle, log on to our website latestly.com).