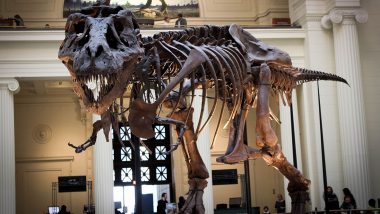 New York, September 16: The skeleton of a 40-foot dinosaur will be auctioned in New York next month. The sale will be held in New York on October 6. The dinosaur was nicknamed "Stan". It is the complete Tyrannosaurus rex specimens ever found. The skeleton was discovered in 1987 near Buffalo in South Dakota. It took three years to excavate and reconstruct the skeleton.

According to a report by news agency AFP, the structure has exhibited at New York's Black Hills Geological Research Institute since it has been excavated and reconstructed. As per researchers, Stan died around 60 million years and was around 20 years. Sweden: 500-Year-Old Sturgeon Found in Denmark's Royal Shipwreck in Baltic Sea.

The skeleton has been used to make replicas for dozens of museums which were eager to acquire their own T-rex model. According to the report, till date, only 50 skeletons of dinosaurs have been discovered. Notably, the first skeleton of a dinosaur was discovered in the year 1902. 800 Kg Fish Found in India? Rare Fish Chilshankar Weighing Almost A Ton Caught in West Bengal’s Digha Auctioned for Rs 20 Lakh (Watch Video).

"It is a once-in-a-generation opportunity to acquire a T-Rex as complete as this," reported AFP quoting James Hyslop, of auctioneer Christie's as saying. The bids are expected from $6 million to $8 million, reported AFP. In October 1997, a T-rex named Sue was fetch $8.4 million in an auction.

Stan was named after the amateur palaeontologist responsible for its discovery. It will be displayed in a window at Christie's headquarters in New York City from September 16 to October 21. It is not the first time that Christie's has placed a historical item in the auction. In 2017, the auction house offered Leonardo da Vinci's rediscovered portrait of Jesus, Salvator Mundi. It was sold for $450 million.

(The above story first appeared on LatestLY on Sep 16, 2020 04:32 PM IST. For more news and updates on politics, world, sports, entertainment and lifestyle, log on to our website latestly.com).