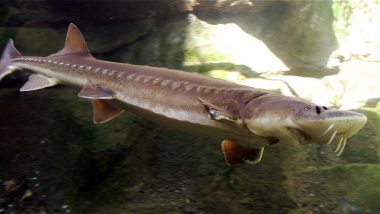 Ronneby, September 7: A two-metre-long sturgeon was found in the pantry of a Danish royal shipwreck in the Baltic Sea by archaeologists. The Danish royal shipwreck is 500-year-old. Researchers consider it a unique discovery. "During archaeological excavations in 2019, a wooden barrel submerged inside the shipwreck revealed the almost complete and well-preserved remains of a sturgeon fish," reported news agency AFP quoting excerpts from the Journal of Archeological Science written by archaeologists from Lund University in Sweden. 800 Kg Fish Found in India? Rare Fish Chilshankar Weighing Almost A Ton Caught in West Bengal’s Digha Auctioned for Rs 20 Lakh (Watch Video).

According to the report by the news agency, the wreck is in good condition due to strange Baltic environment. Researchers discovered that low salinity in the sea is unsuited for shipworm. Notably, shipworms, eat the wood in the ocean system. Brendan Foley of Lund University told AFP that the seafloor is a fine clay, ideal for preserving organic material, and low dissolved oxygen levels further contribute to the preservation of organics. Fish With Human Face and Sharp Teeth Found in Malaysia Will Freak You Out! Know More About This Species of Triggerfish (View Pics and Video).

In 1495, King Hans of Denmark sailed for Sweden on his best vessel the Gribshunden. It was one of its era's most imposing warships. King Hans set sail for Sweden with the aim of restoring the Kalmar Union under Danish rule between the three Scandinavian countries. However, the ship sank off the coast of Ronneby. At that time, Ronneby was part of Denmark, but now it belonged to Sweden. Thought, the Kalmar Union survived the blow, but it was dissolved almost a century later after Sweden seceded in 1523.

(The above story first appeared on LatestLY on Sep 07, 2020 03:51 PM IST. For more news and updates on politics, world, sports, entertainment and lifestyle, log on to our website latestly.com).