Get latest articles and stories on Business at LatestLY. Biesse India has achieved a landmark by rolling out the latest CNC Machine 'Rover AS 15'. The machine became the 10,000th machine to be produced by Biesse in India. Out of the 10,000 machines that were made in India so far, more than 70 per cent of them were exported to 70-plus countries across 6 continents including the USA, EU, Russia, Australia and many more. 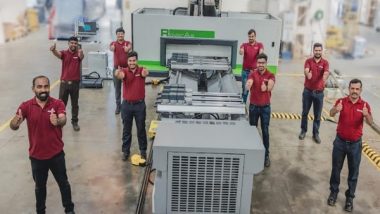 Team Biesse India at the occasion of rolling out their 10,000th machine.

Bangalore (Karnataka) [India], January 21 (ANI/NewsVoir): Biesse India has achieved a landmark by rolling out the latest CNC Machine 'Rover AS 15'. The machine became the 10,000th machine to be produced by Biesse in India. Out of the 10,000 machines that were made in India so far, more than 70 per cent of them were exported to 70-plus countries across 6 continents including the USA, EU, Russia, Australia and many more.

The quality of machines and the service provided by Biesse have helped in developing their production units in Bengaluru to a worldwide caterer of excellent quality machines. Biesse India has also played a vital role in accelerating India's mission to 'Make in India'. The company, over the years, has diversified its offering by adding machines and systems for the glass and advanced materials processing sector.

Biesse India started its operations in 2006 with a team of 13 employees. The company was then operating in a small shed of just 1000 square meters in Yeshwantpur and had a production capacity of 13 machines in a year. Fifteen years down the line, as Biesse India rolls out its 10,000th machine, the company has two production units in Bengaluru, with an annual production capacity of 2000 machines, spread across 30,000 square meters with more than 700-plus employees. The first 5000 machines were completed in November 2017 and from there on it took Biesse India only four years to complete the next 5000 machines. This exponential growth is primarily a result of Biesse's adaption towards a well-structured lean manufacturing system that ensures maximum utilization of resources with minimal wastage.

The Biesse values that recognize people as capital and the suppliers as partners have resulted in generating employment and supporting local suppliers in India. 95 per cent of the senior management in Biesse India is hired from the local community and more than 88 per cent of purchases are made from local suppliers.

Biesse India, with continuous support from its investors and top management in Biesse Italy, has ensured that its production units in Bengaluru are functioning as an environmentally friendly industry playing as societal responsible Corporate through various CSR initiatives. Biesse India has conducted numerous plantations drives in villages and educational campuses with a team of employees nurturing them for a period of 16 months. Biesse has set up advanced wood working centres in collaboration with IWST in Bengaluru and with KIET in Ghaziabad promoting Skill India initiatives. During the COVID-19 pandemic, Biesse India stood by its people-centric values by introducing BEST (Break, Enhance, Sanitize, Test) strategy and by facilitating vaccination drives not just for its employees but for their family members too.

Biesse India is Biesse Group's first production site outside Italy. What started as a strategic location to cater to the market in the East, today has grown into a global exporting hub. Commenting on the bright future ahead for Biesse India, Sayeed Ahmed, CEO of Biesse India said, "Biesse's focus in the coming years will be to incorporate cutting edge technology in its functioning to ensure its stakeholders are delivered nothing but the best in class. Our manufacturing and Technical Centres in Bengaluru will function as centres in pursuit of innovation." Expressing his gratitude for achieving 10,000 machines he added, "The journey of Biesse India has been empowered by our core values that are centred around our people, suppliers and customers".

Biesse Group is a multinational leader in technology for processing wood, glass, stone, plastic and metal. Biesse India is a direct subsidiary of Biesse Group and also the only production site of Biesse Group outside Italy. Biesse Group designs, manufactures and distributes machines, integrated systems and software for manufacturers of furniture, door/window frames and components for the construction, shipbuilding and aerospace industries.

The company invests 4 per cent of its annual revenue in research and development and has registered over 200 patents. It operates through 12 industrial sites, 39 branches, 300 agents and selected dealers, exporting 85% of its production. Biesse India itself exports to more than 70 countries across continents. Founded in Pesaro in 1969 by Giancarlo Selci, Biesse Group has been listed in the STAR segment of the Italian Stock Exchange since June 2001. It currently has 4000 employees around the world.