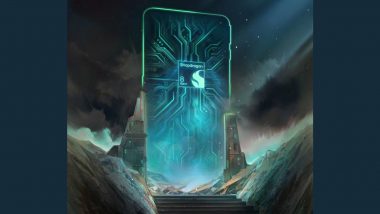 As per the teaser, the Black Shark 5 lineup will come powered by Qualcomm Snapdragon 8 Gen 1 processor. Previously leaked reports had revealed that the vanilla model will come packed with a Samsung E4 AMOLED display with an FHD+ resolution and a refresh rate of 120Hz. It is said to be fuelled by a 4,600mAh battery with 120W fast charging support. The vanilla model might be powered by Snapdragon 888 Plus chipset.

On the other hand, the pro model might get a 6.8-inch AMOLED Quad HD+ display with a refresh rate of 144Hz. The handset could pack a 5,000mAh battery with a 120W rapid charging facility. In addition to this, Black Shark 5 Pro is likely to run on Android 12 OS. When launched, the Black Shark 5 Series will rival the likes of Lenovo Legion Y90, Nubia RedMagic 7.

(The above story first appeared on LatestLY on Jan 21, 2022 05:17 PM IST. For more news and updates on politics, world, sports, entertainment and lifestyle, log on to our website latestly.com).