According to Fox News, the 44-year-old country music singer opened up about his prenuptial health goal in a recent Party Barn Radio episode on Apple Music with fellow country music star Luke Bryan. 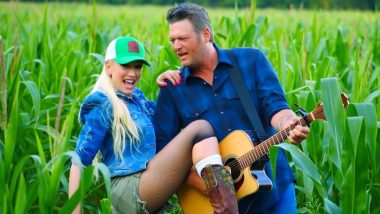 American singer Blake Shelton recently revealed that he is looking to lose his quarantine weight before he gets married to Gwen Stefani. According to Fox News, the 44-year-old country music singer opened up about his prenuptial health goal in a recent 'Party Barn Radio' episode on Apple Music with fellow country music star Luke Bryan. On Thursday (local time), Shelton admitted he wants to lose a few pounds before he marries Gwen Stefani. "I feel like if I say 10 [pounds], I have to do it. So 10. It's out there now. I can't let people down," he told Bryan. It’s Official! Gwen Stefani and Blake Shelton are Engaged

The 'God's Country' singer joked, "I've readjusted all the mirrors in the house, so they look like when you're taking a selfie from up above because I can't even stand to look at myself in the mirror." "So, I've rearranged them where they're kind of angled down, looking down on me, so I'm looking up and it's not so bad." As reported by Fox News, in September, Shelton poked fun at how much weight he gained throughout the coronavirus lockdowns on 'The Ellen DeGeneres Show.' COVID-19 Effect: Gwen Stefani Helps Fiance Blake Shelton with His ‘Quarantine Mullet’ (Watch Video)

The singer sarcastically joked that he couldn't enjoy his grey-dyed hair because he had gained more than 100 pounds. "I actually really liked it. I would have really liked it better had I not gained 117 pounds during the quarantine. I thought it made me look younger, but I was still just as fat. Now I'm actually trying to lose weight," he told DeGeneres at the time. The 6-foot-5-tall singer, despite how he feels about his current weight, said that he is confident that Stefani will marry him.

As per Fox News, Shelton and Stefani went public with their engagement in October after five years of dating. The country singer is two-times divorced, having been married to singer Miranda Lambert and school teacher Kaynette Williams. Stefani divorced husband Gavin Rossdale after 14 years of marriage in 2016.