Ariana Grande to Be Paid 25 Million Dollars to Coach Contestants on The Voice: Reports 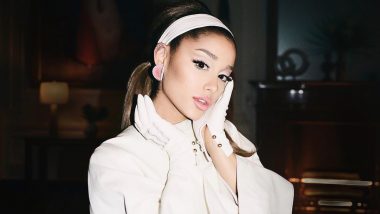 It came as a shock for all Nick Jonas fans when Ariana Grande shared her picture from the sets of The Voice. She announced that she will be replacing Jonas for the 21st season of the reality show. Grande took to Twitter to express her happiness on coming on board for the show and wrote a message saying that she will miss Nick Jonas on the show. Jonas also welcomed him to The Voice family and send love to the Rain On Me singer. Now, the latest reports about Grande's fee have surfaced online which suggest that she is charging a hefty amount for her role as a coach on The Voice. The Voice Season 21: Ariana Grande to Join the Singing Reality Show as Coach.

Rob Shuter from iHeartRadio’s podcast named Naughty But Nice, revealed, “Sources say Ariana is getting a whopping 20 to 25 million dollars for the show, putting her in the same category as Katy Perry on American Idol. Kelly Clarkson got about $15 million when she joined The Voice. John Legend and Blake Shelton get around $13 million a season, which means the women on the show are making the most”. Interestingly, last year Forbes had declared Ariana Grande as the ‘highest-paid female musician’ on the 2020 Celebrity 100.

NBC is also very elated to welcome Grande on the show. Jenny Groom, the executive vice president of unscripted content for NBC Universal Television and Streaming said in a statement, "As an undeniable force in pop music, Ariana's inimitable success in the music industry is extraordinary. We were thrilled to learn that she is a true fan of 'The Voice' and know that this enthusiasm will add to her impact as a dynamic coach."

"Ariana is a visionary with over a decade of experience in the music industry. Her unmatched vocal skills, creativity and unique expertise on all facets of the industry will make her an invaluable coach to the next generation of artists," added Groom. John Legend also gave Grande a big welcome, writing on Twitter, "So excited to welcome Ariana to our Voice family!!" Ariana Grande Teases Fans with Netflix’s New Project on Twitter; Singer Shares Black-and-White Photos and Tags the Streaming Giant.

(The above story first appeared on LatestLY on Apr 01, 2021 10:03 AM IST. For more news and updates on politics, world, sports, entertainment and lifestyle, log on to our website latestly.com).