Actor Damian Lewis paid a poetic tribute to his late wife-actor, Helen McCrory, while making his first stage appearance since her death. 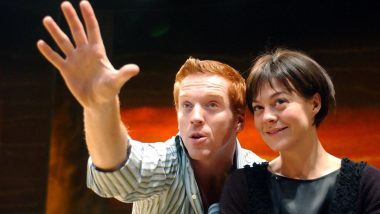 Actor Damian Lewis paid a poetic tribute to his late wife-actor, Helen McCrory, while making his first stage appearance since her death. Lewis read a special poem at the National Theatre's 'A Poet for Every Day of the Year' event held at London's Lyttelton Theatre on Tuesday night, as per People magazine. "One person whose thunder absolutely would not be stolen was Helen McCrory. You could try, but it wouldn't work," Lewis said to the crowd. RIP Peter Robbins: Charlie Brown’s Voice Actor Dies at 65.

The event was dedicated to McCrory who died in April at age 52 after a battle with cancer. McCrory was known for her roles as in the 'Harry Potter' films and 'Peaky Blinders'. She and Lewis married in 2007 after they met on the production of 'Five Gold Rings' at London's Almeida Theatre in 2003. They share a 15-year-old daughter Manon, and son 14-year-old son Gulliver. Back in April, Lewis had also penned an emotional tribute for her wife explaining how heroic she was during her illness. RIP Gaspard Ulliel: French Prime Minister Jean Castex Condoles the Demise of Moon Knight Actor.

As per People magazine, 'A Poet for Every Day of the Year' event will be available to stream on National Theatre's YouTube page on March 3 commemorating the special occasion of World Book Day 2022.