In an interview with Variety, Robert De Niro was asked how he felt about Taylor Swift screening her short film All Too Well at the Tribeca Film Festival, to which he joked saying he has all of her albums. The short film titled, A Conversation With Taylor Swift starred Sadie Sink as a young Taylor and Dylan O'Brien as her ex. 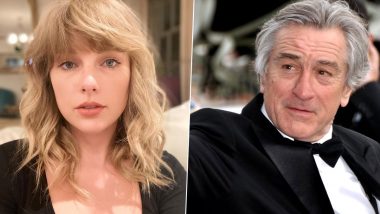 Hollywood legend Robert De Niro has opened up about his unlikely liking of Taylor Swift's music, joking he owns all of the Grammy award-winning singer's albums. While talking to Variety about the upcoming Tribeca Film Festival, Robert along with the event's co-founder Jane Rosenthal were asked their thoughts about Swift screening her short film, All Too Well, at the festival. Texas School Shooting: Taylor Swift, Chris Evans, Mindy Kaling And Other Celebs Condemn The Killing of Students at Ulvade's Robb Elementary School.

On being inquired if he's a Swiftie, Robert laughed, "I have all of her albums." He added, "I'm not not a fan. I probably hear her music and like it on the radio."

"My young daughter puts a station on, and it drives me crazy when they chat. When they have music, it's OK," continued the actor.

Page Six reports that later this week, Swift will screen All Too Well: The Short Film at the festival and discuss the process of bringing the 13-minute track's backstory to fruition.

Titled A Conversation with Taylor Swift, the event will take place at the Beacon Theater in front of a live audience on June 11. Taylor Swift Feels 'Class of 22' While Receiving Her Honorary Doctorate From NYU.

Swift released the project in November of last year, which was based on a 10-minute version of the song she released the same month. As per Page Six, the short film starred actor Sadie Sink and Dylan O'Brien as a young Swift and her ex-boyfriend -- widely rumoured to be Jake Gyllenhaal, though she never officially confirmed the song is about him.