Actor Sunny Deol celebrated this year's Holi with the cast and crew of his upcoming film Gadar 2. 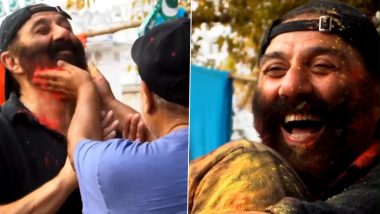 Actor Sunny Deol celebrated this year's Holi with the cast and crew of his upcoming film Gadar 2. Taking to his Instagram handle, Sunny shared a video in which he could be seen applying gulal to 'Gadar 2' director Anil Sharma and his son Utkarsh Sharma. Amitabh Bachchan Shares a Lovely Picture With Wife Jaya Bachchan on the Occasion of Holi 2022!

"#HappyHoli everyone from the team of #Gadar2," Sunny captioned the post.

On the film front, Sunny is currently busy shooting for 'Gadar 2', a sequel to his 2001 blockbuster 'Gadar: Ek Prem Katha', co-starring Ameesha Patel in the lead role. The first film mainly revolves around Tara Singh (portrayed by Sunny), a Sikh truck driver from Amritsar, who falls in love with Sakina (portrayed by Ameesha), a Muslim girl hailing from a political family in Lahore, Pakistan. Late Amrish Puri was also a part of the first instalment. Karisma Kapoor Shares a Beautiful Throwback Picture With Her Parents As She Wishes ‘Happy Holi’ to Fans!

Gadar 2 will also star film director Anil Sharma's son Utkarsh Sharma in the lead role alongside Sunny and Ameesha. Utkarsh had played the role of Sunny and Ameesha's son in the first part. The film went on floors in December in Himachal Pradesh.