American singer-songwriter Taylor Swift made history by becoming the first woman to win the award for album of the year three times after Folklore triumphed in that marquee category at the Grammy Awards 2021. 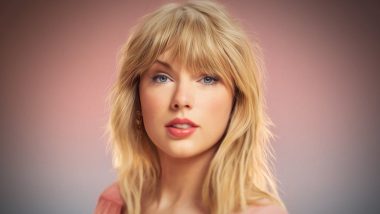 American singer-songwriter Taylor Swift made history by becoming the first woman to win the award for album of the year three times after Folklore triumphed in that marquee category at the Grammy Awards 2021. As per Variety, she previously took home the award for her sophomore album, 'Fearless' in 2010, and scored again in 2016 for her fifth album titled '1989'. 'Folklore' is her eighth album. Grammys 2021: Billie Eilish, Megan Thee Stallion, Beyonce – Meet the Best Dressed Stars From the Awards Night!

The only previous triple winners in the category to win as artists are Frank Sinatra, Paul Simon, and Stevie Wonder. Swift won in the category after having been shut out of nominations in the division for her two previous albums 'Reputation' and 'Lover'. 'Folklore' beat out albums by Dua Lipa, Post Malone, Jhene Aiko, Black Pumas, Coldplay, Jacob Collier, and her friends in Haim to claim the top honour. Grammys 2021: Post Malone Delivers a Rocking Performance of ‘Hollywood’s Bleeding’ at the 63rd Annual Grammy Awards (Watch Video)

'Folklore' was just one of two original studio albums that Swift recorded and released under quarantine conditions in 2020 with the help of producer and co-writers Aaron Dessner and Jack Antonoff. The 'sister' album to 'Folklore', a July 2020 release, was 'Evermore', which came out in December and gives her another shot at the award ceremony next year, as it falls into the eligibility period for the 2022 Grammys.

While accepting the award, the 31-year-old singer gave a sweet shout-out to her boyfriend of more than four years, Joe Alwyn, who co-wrote 'Exile' and 'Betty' with her on the album, as well as 'Champagne Problems', 'Coney Island' and 'Evermore' on its successor 'Evermore', reported People magazine. "Joe is the first person that I play every single song that I write, and I had the best time writing songs with you in quarantine," she said. Swift went on to thank all of her "collaborators," as well as "James Inez and Betty and their parents," referencing close pals Blake Lively and Ryan Reynolds and their three daughters.

"They are the second and third people that I play every new song that I write," she said. She concluded her speech by thanking her fans. She said, "You guys met us in this imaginary world that we created, and we can't tell you how honored we are forever. Swift added, "Thank you so much and thank you to the Recording Academy. We will never forget you did this for us. Thank you so much." The star also received nominations in the song of the year and best pop solo performance categories for 'Cardigan', best pop duo/group performance for 'Exile' with Bon Iver, and best song written for visual media for 'Beautiful Ghosts'.

Folklore featured tracks such as 'My Tears Ricochet', 'Mirrorball' and 'The Last Great American Dynasty'. The Grammy Awards, hosted by Trevor Noah, were delayed owing to the ongoing Covid-19 pandemic. The annual show shifted from its original January 31 broadcast to March 14. The ceremony honours musical artists, compositions, and albums across 84 categories. Though usually held at the Staples Center, this year's festivities will take place at the Los Angeles Convention Center.