Get latest articles and stories on Health at LatestLY. Survivors of childhood cancer have increased risks of experiencing various challenges, such as emotional distress, impaired quality of life and financial burdens. 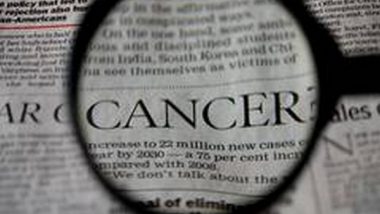 Washington [US], October 25 (ANI): Survivors of childhood cancer have increased risks of experiencing various challenges, such as emotional distress, impaired quality of life and financial burdens.

A new study has indicated that many long-term survivors of childhood cancer may also face an elevated risk of suicide, although their absolute risk is still low.

The findings were published in 'CANCER', a peer-reviewed journal of the American Cancer Society.

The relatively limited data on suicide in survivors of childhood cancer have been inconsistent, though they have generally suggested that suicide rates in these individuals are low. When Justin Barnes, MD, MS, of Washington University in St Louis School of Medicine, and his colleagues examined a large population-based database to evaluate suicide rates among individuals who had childhood cancer in the United States from 1975-2016, they too found that the risk of suicide was low.

The team identified 49,836 childhood cancer survivors and 79 suicides, and there was approximately 1 suicide per 10,000 people per year. This rate was similar to the rate seen in the general US population.

However, adult survivors of childhood cancer over 28 years of age had a higher risk of suicide than individuals at the same age from the general population, with 2 suicides per 10,000 people per year.

"Our findings raise crucial questions about what can be done to prevent suicide in vulnerable long-term adult survivors of childhood cancer," said Dr Barnes.

"Such strategies may include improving efforts to screen for distress and better-employing survivorship care with a multidisciplinary team," added Dr Barnes.

Dr Barnes noted that additional research is needed to study the underlying reasons and risk factors for suicides in these individuals.

"These might include a history of depression, psychiatric comorbidities, persistent pain, socioeconomic stressors, and cancer treatment specifics, all of which we were unable to evaluate in our study," he said.

"A better understanding may be helpful in tailoring interventions to cancer survivors at greatest risk," he concluded. (ANI)