Hilary Duff Shares BTS Pictures From How I Met Your Father Sets And It Brings Back the HIMYM Nostalgia!

Actor Hilary Duff, widely known for playing the lead role in the TV series'Lizzie McGuire, recently treated her fans with a picture from the sets of her new show How I Met Your Father, which is an upcoming spin-off series of the popular show How I Met Your Mother. 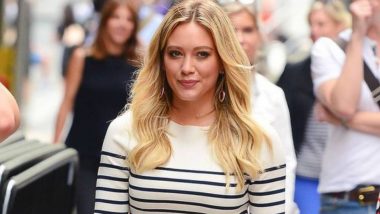 Actor Hilary Duff, widely known for playing the lead role in the TV series'Lizzie McGuire, recently treated her fans with a picture from the sets of her new show How I Met Your Father, which is an upcoming spin-off series of the popular show How I Met Your Mother. On Thursday, the 33-year-old singer-actor shared a behind-the-scenes snapshot taken from the sets of the upcoming 'HIMYM' sequel series. How I Met Your Father: Josh Peck Joins the Cast of Hilary Duff’s Hulu Series.

With the photo showing different camera angles of herself filming a scene, Duff captioned her post, "Hello, I'm Sophie @himyfonhulu," a nod to her character's name on the show. On Instagram, Duff's co-star Francia Raisa also shared various pictures from the sets, including an array of shots of herself with different members of the cast and crew, as well as a selfie of herself and Duff in a warm embrace. Daniel Augustin Replaces Brandon Micheal Hall in How I Met Your Father Series.

"Haaaaaave you met the cast?! @himyfonhulu. Day 1 complete," Raisa captioned the post. Isaac Aptaker, who serves as an executive producer on the forthcoming comedy, also shared another look at filming, writing, "Day one. #himyf," alongside his own snapshot. Earlier this year, Hulu announced that Duff would be taking on the lead of the 'How I Met Your Mother' sequel series, reported People magazine.

10 episodes have already been ordered with Aptaker and Elizabeth Berger, who served as 'This Is Us' co-showrunners, leading the charge alongside Carter Bays and Craig Thomas, who created the original series for CBS. Duff will also serve as a producer. In a statement at the time that the project was announced, Duff said, "I've been incredibly lucky in my career to play some wonderful characters and I'm looking forward to taking on the role of Sophie. As a huge fan of How I Met Your Mother, I'm honored and even a little nervous that Carter and Craig would trust me with the sequel of their baby. Isaac and Elizabeth are brilliant, and I can't wait to work alongside them and all of their genius." "Just fangirling over here getting to join the Hulu Originals and 20th families.

I realize these are big shoes to fill and I'm excited to slip my 6 1/2 's in there!" the mother of three added at the time. "I truly feel blessed. Suit up!" The upcoming series will revolve around Sophie and her close-knit group of friends who are in the midst of figuring out who they are, what they want out of life, and how to fall in love in the age of dating apps and limitless options.

Hilary Duff  Shares How I Met Your Father Set Photos

The pop culture phenomenon starred Josh Radnor (Ted Mosby), Cobie Smulders (Robin Scherbatsky), Neil Patrick Harris (Barney Stinson), Jason Segel (Marshall Erikson) and Alyson Hannigan (Lily Aldrin). The series followed Radnor's character Ted Mosby, who tells his children the story of how he met their mother. In its nine-season run, 'How I Met Your Mother' earned multiple Emmy wins and Golden Globe recognition. A release date for 'How I Met Your Father' has not yet been announced.