How I Met Your Father Review: Hilary Duff and Suraj Sharma’s HIMYM Spinoff Sneaks in One Decent Surprise in an Otherwise BLAH Beginning! (LatestLY Exclusive)

How I Met Your Father is a spinoff series of popular sitcom How I Met Your Mother, and is created by Isaac Aptaker & Elizabeth Berger. The series stars Hilary Duff, Christopher Lowell, Francia Raisa, Suraj Sharma, Tom Ainsley, Tien Tran, and Kim Cattrall. 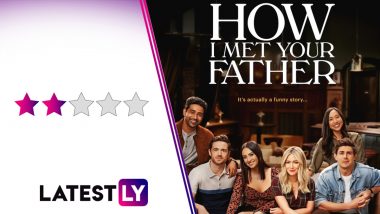 How I Met Your Father Review (Photo Credit: HULU)

In fact, Neil Patrick Harris tried to protect his character and even confirmed a fan theory that the show's main narrator Ted Mosby might have exaggerated Barney's qualities to his kids to make Ted come across as a better person. That said, there is no denying that it is Barney who is the most remembered from the show, a character, despite his various depravities, makes you return to it. How I Met Your Father desperately needs a X-factor like Barney Stinson to survive and sustain.

It's not that the other characters in the Hulu show are not trying to take his vacant throne, and maybe it is too soon for me to judge they won't. But if I remember right, Barney already hit all the scene-stealing notes right in the first episode itself.

Okay let's keep Barney aside for the time being, even the other main characters registered a good impact in the first episode itself. Not so the case with the spinoff. Even with a different set of characters and their individual storylines in the Big Apple, How I Met Your Father feels dated for the present times in its treatment and tone, laughter track and all. Here's a reminder again that how wrong Barney was, when he kept saying his one rule 'New is always good'!

How I Met Your Father uses the narrative structure of its predecessor,  with Kim Cattrall as Sophie who in 2044 videocalls her son drunk and begins telling him the story of how she met his father. The twist here being, unlike in HIMYM where the older Ted (voiced by the late Bob Saget) was never seen till the final episode, here it is the son who is unseen.

So Sophie recalls her younger days, with the story actually starting off with her younger version, played by Hilary Duff, in 2022 (that is surprisingly pandemic-free) and her life in New York living with her sassy stylist roommate Valentina (Francia Raisa). She is eager to start a relationship with her Tinder date Ian (Daniel Augustin), but is heartbroken to learn that he has to migrate to Australia for work purposes. How I Met Your Father: Hilary Duff and Suraj Sharma’s Hulu Series Drops a Sweet How I Met Your Mother ‘Cameo’ That Leaves Fans Nostalgic!

It is also the night she meets other people who would be her friends and be crucial in her story ahead. There is Jesse (Christopher Lowell), an Uber driver who drives Sophie to her Tinder date and could be the 'Robin' in her story. We also have Sid (Suraj Sharma), Jesse's best friend and roomie, and also the owner of the bar Pemberton's, who is recently engaged. Jesse also has his adopted sister Ellen (Tien Tran) staying with him, after she took a break from her town. She has recently divorced from her wife (with the joke being they were the only two lesbians in the town) and is looking for a new relationship.

We also have Charlie (Tom Ainsley), Valentina's British boyfriend who recently moved to New York to get away from his former aristocratic lifestyle and is living with Valentina and Sophie. Cue, a Meghan Markle joke there!

The first couple of episodes set up these characters and what would be their own and interpersonal dynamics at least for the one season. Some of that staging and meetups felt kinda awkward. Be it the older Sophie calling up her disinterested son or the younger Sophie meeting with Jesse and Sid for the first time after booking a ride with the former (seriously, what's Sid doing in the car? Is that allowed?), they don't feel well-setup.

In the original series, most of the gang were friends beforehand, and it was only Robin who got to be the recent entrant. In How I Met Your Father, I am not exactly impressed by how the show sets up the friendships. That said, the lingering attention given to setting up Sophie and Jesse as a central couple (though it is not necessary he would be the 'Father') is passably likeable enough.

On the other hand, I felt the steam running out of Valentina and Charlie's equation, two scenes into their relationship. Him being British and feeling like fish out of water in New York is HIMYF's equivalent of the Canadian jokes made at Robin's expense. That shtick doesn't hold long here, and I do hope that the showrunners have a better arc written for Charlie, before, like Valentina, we feel smothered by him. Before How I Met Your Father, Did You Know There Was ‘How I Met Your Dad’ Starring Greta Gerwig? Here’s What Happened to This Lost HIMYM Spin-Off!

I think that's what the problem I have started feeling with How I Met Your Father. I like the fact that there is more representation in the group dynamics, compared to the too white clique of How I Met Your Father - a more focus on sis-mance, an Indian and a British in the mix and a character who is queer. The thing is none of the characters are leaving a solid impression here, including the lead Sophie, even when the actors aren't that bad. Because the first two episodes don't really establish their characters beyond surface-level notes.  Lowell's Jessie and Raisa's Valentina hold a sliver of promise, though.

To make matters even blander, most of the jokes don't land well. How I Met Your Father is updated with recent times - or at least it believes it does with characters keep bringing up the recent pop culture references. What stops making it a standout is that it doesn't bring any innovative storytelling techniques that the original series was known for, instead following the same path paved by the former, but turning into HIMYM's pale shadow at that. Which is surprising, since it has the same director as the original - Pamela Fryman. Wonder if this is Hulu going all Matrix: Resurrections on her...

However, the final scene of the first episode left me surprised with how it connects to the original show.

- The Actors Are Good Enough

- Has Potential to Do Better

- Gets Trapped in the Obvious Comparisons of the Former

(The above story first appeared on LatestLY on Jan 20, 2022 07:00 PM IST. For more news and updates on politics, world, sports, entertainment and lifestyle, log on to our website latestly.com).