Get latest articles and stories on India at LatestLY. The Assam government on Sunday approved an ex-gratia of Rs 2 lakh each to those who sustained serious injuries during the Assam agitation that took place during 1979-85. 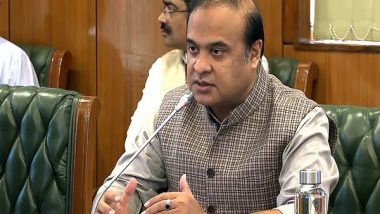 Guwahati (Assam) [India], May 29 (ANI): The Assam government on Sunday approved an ex-gratia of Rs 2 lakh each to those who sustained serious injuries during the Assam agitation that took place during 1979-85.

The total amount of Rs 6.90 crore has been allocated for the purpose.

The decision was taken during the Cabinet meeting that was held today under the chairmanship of Chief Minister Himanta Biswa Sarma.

The movement, against illegal Bangladeshi immigrants, was held during the period of 1979 to 1985 and was led by the All Assam Student Union (AASU) with the support of various other organizations in the state. The movement came to an end with the Assam accord in 1985. However, a number of people lost their lives while many were left injured.

Speaking to ANI, Assam Health Minister Keshab Mahanta said, "Assam cabinet has approved ex-gratia of Rs 2 lakh each to 288 seriously injured persons and 57 women victimized during Assam agitation and Rs 6.90 crore to be distributed among those injured and victimized during 1979-85."

The Health Minister also informed that the government has also approved a payment of Rs 1 lakh each to all the 1263 garden families of Doloo Tea Estate as compensation for airport land acquisition as a goodwill gesture for their corporation in the development work of Greenfield airport at Silchar.

Am amount of Rs 12.63 crore has been allocated for the purpose.

"Rs 142.50 crore will be paid against outstanding Provident Fund dues of Assam Tea Corporation Ltd (ATCL) workers. Rs 1208 crore sanctioned for 3007 Amrit Sarovars targeted to be completed it in all respect by August 15, 2023," said Mahanta.

Other decisions of the state Cabinet include exemption of procedure of Fixation of Ceiling (FOC) for payment of monthly honorarium of part-time ICT instructors working in Secondary Schools under Dr Banikanta Kakoty Computer Literacy Programme, issuance of Assam Taxation (On Specified Lands) (Amendment) Ordinance, 2022.

"This will enable the extension of tax exemption of green tea leaves for a further period of three years from January 1, 2022, under the Assam Taxation (On Specified Lands) Act, approval to rationalization of Zonal valuation and fair compensation of acquisition of tea land, determination of 10 per cent of zonal value of nearest agricultural land as a floor value, Amendment of Assam Right to Fair Compensation and Transparency in Land Acquisition, Rehabilitation and Resettlement Rules, 2015," he said.

The Assam government has also decided to provide minority certificates to six minority communities in the state, said state Health Minister Keshab Mahanta on Sunday. "The people of Muslims, Christians, Sikhs, Buddhists, Jains, and Parsis will be provided minority certificates," said the Minister.