Pakistani Delegation Arrives in India for Talks on Water Dispute

A five-member delegation from Pakistan has crossed over to India through the Wagah-Attari border for talks on the water dispute between the two nations. 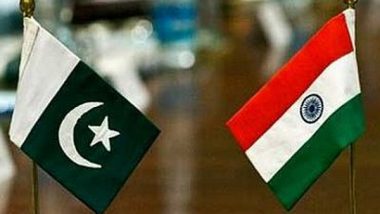 Islamabad, May 29:  A five-member delegation from Pakistan has crossed over to India through the Wagah-Attari border for talks on the water dispute between the two nations.

The Pakistani delegation crossed over to India on Sunday morning and it is scheduled to have meetings with the Indian side in New Delhi on Monday and Tuesday.  Pakistan Blames India for Delay in Talks To Resolve Water Disputes

"There will be talks on the sharing of flood forecast data while the PCJW (Pakistan Commission for Indus Water) annual report will also be discussed during the negotiations," said Pakistan's Commissioner for Indus Water, Syed Muhammad Mehr Ali Shah.

The Pak delegation during its previous rounds of talks had shared its reservations and objections over the spillway and freeboard of the Pakal Dul project, demanding that a visit to the site should be arranged in the early part of May and another annual meeting on the issue should be held and discussions on the matter could be made part of the annual report and minutes of the PCIW.

However, the demand to visit the Pakal Dul project has not been met by the Indian side yet and the Pak delegation will not be visiting the dams.

"The Pakistani delegation will not visit the under construction Pakal Dul and Lower Kalnaj dams, but the matter and other projects will be discussed," said Mehr Ali Shah.

"Pakistan had always insisted on the implementation of the Indus Water Treaty (IWT) and raised its voice on India's behaviour in a timely manner," Shah added.

In March this year, both India and Pakistan had agreed and reiterated their respective commitment to implement the Indus Water Treaty (IWT) in its true spirit and had expressed hope that the next meeting of the Permanent Indus Commission would be held as per schedule or on an early date in India.

Not much is expected out of the meeting. However, the routine meetings between the two arch-rival neighbours, held alternatively in India and Pakistan annually, are certainly a forward movement towards bilateral engagements.

(The above story first appeared on LatestLY on May 29, 2022 06:20 PM IST. For more news and updates on politics, world, sports, entertainment and lifestyle, log on to our website latestly.com).