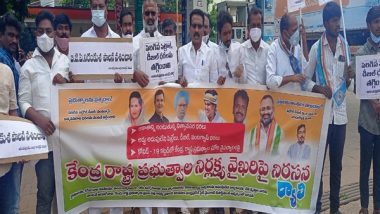 "Though crude oil prices are reduced all over the world, the fuel prices are not reduced in India," said Congress leaders.

They further said that Jagan had demanded a rollback when he was in opposition, but is not raising his voice against PM Modi, after becoming the CM. "Petroleum products should be brought into the ambit of GST," they demanded.

Congress is holding a nationwide "symbolic protest" in front of petrol pumps today across the country against rising fuel prices. (ANI)