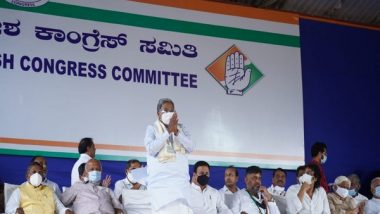 Karwar (Karnataka) [India], August 2 (ANI): Former Karnataka Chief Minister and Congress leader Siddaramaiah slammed the BJP government here on Monday stating that the BJP government is only busy in its cabinet formation and not bothered about the third wave of COVID-19.

Addressing a press conference in Uttara Kannada, Siddaramaiah said, "The primary task of the state government is to prevent the Corona's third wave in the state but the government is only busy in cabinet formation."

He further said that in the neighbouring states of Maharashtra and Kerala, the third wave has already reached the "epidemic" level once again. "Those who come to our state from these states have a high probability of spreading the infection. In this regard, they have to be checked and monitored properly at the borders of the state", he added.

Most of the state's coastal, especially Chamarajanagar and Kodagu districts are closely connected to Kerala and people come here from Kerala in large numbers, said the former Chief Minister and added that it is important to prevent the spread of COVID-19 infection which must be the priority of the state government.

"We have already suffered a lot. Thousands of people have died without proper hospitalization, beds, ventilators, and oxygen, which must be prevented from recurring. If the Chief Minister of Karnataka B Bommai goes to Delhi once a time, then that's fine. But, why does CM need to go there repeatedly? The BJP High Command must also understand the issue of the state", said Siddaramaiah.

"Basavaraj Bommai is now the Chief Minister. I am not criticizing him but I demand him to pay attention to the problems of the state. The government must ensure that the current situation does not create one more lockdown situation. The number of infections in the past two days has been close to two thousand. If it crosses two thousand benchmarks, it means that the third wave has begun. So, the Karnataka government needs to be cautious", he said. (ANI)