COVID-19 Vaccination in India: Govt Preparing with States for Past 4 Months for Vaccination, Says Harsh Vardhan

"Co-Win has been developed as a platform where the vaccine will be tracked along with its temperature. It will also track the potential beneficiary up to the point till that person gets a second dose and he generates his certificate," he said. 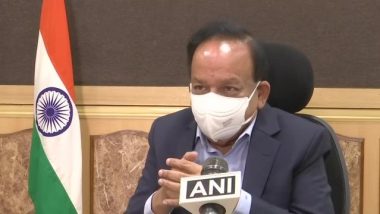 New Delhi, December 21: Union Health Minister Harsh Vardhan has said that the government has been working with the state governments for the past four months for preparations regarding Covid-19 vaccination in the country.

He was asked if the country is ready for vaccination and if there are certain issues that need to be resolved. The minister talked about India's vast experience in vaccination including the campaign to get polio-free. Coronavirus Is of Natural Origin, Not Invention of Man, Says Russian Vaccine Maker.

"As far as the country's ability is concerned, I would like to remind that around 25 years ago, India had 60 percent of polio-affected children in the world. We started giving vaccines to children below the age of five years on a single day. I got support from people. We first did it in Delhi, which was followed by other parts of the country. The country's model was followed by many Southeast Asian nations. We gave vaccines to children for two decades and the result was that in 2014, India came in the WHO category of polio-free nations," the minister said.

"We also carry out a universal immunization programme under which we give 12 types of vaccines to children. So there is no shortcoming in our ability. We have made full preparation. We have involved the state governments, made task force at the state level, district, and block level. We have provided training to master trainers in the country and also at the state level we have provided training. We have given training in 260 districts to more than 20,000 people," he said.

The minister referred to Co-WIN digital platform, including a mobile application, for real-time monitoring of Covid-19 vaccine delivery. "Co-Win has been developed as a platform where the vaccine will be tracked along with its temperature. It will also track the potential beneficiary up to the point till that person gets a second dose and he generates his certificate," he said.

The minister said there are 28,000 to 29,000 cold chain points in the country. "The procurement process has also been started for requirements like vaccine carriers for cold chains, deep freezers, mobile vans, and refrigerators. How many teams are required at vaccination centre and volunteers require to assist those teams, what will be norms at places where the vaccination will be given, the government has worked in detail on many issues with the state governments," he said. Italy Detects New Mutated Coronavirus Strain in UK Returnee.

Harsh Vardhan said it was a matter of great happiness and pride that Prime Minister Narendra Modi regularly monitors such issues and "provides guidance and suggestions". He also referred to the Prime Minister's visits to facilities that are developing the Covid-19 vaccine.

The minister said India may begin vaccinating people against Covid-19 in January and the government's first priority has been the safety and efficacy of the vaccine.