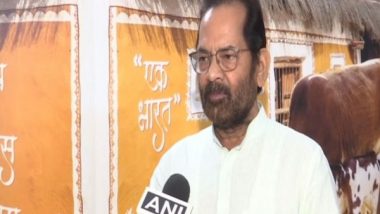 Speaking to ANI, Naqvi said, "The ruckus must stop. The opposition must stop the commotion at Parliament. The government has already clarified that it is ready to discuss or debate any issue the Opposition wants. Earlier the Opposition parties had said that they want to discuss COVID. They ran away from the discussion. Then they said that they want to discuss the farmers' issue and again ran away from it."

Asked about the reports of loss of Rs 133 crore in the two weeks of the Monsoon session of the parliament, Naqvi said, "This time, what has happened in Parliament, we can say 'charcha chawanni, kharcha rupaiya.' They should participate in discussion and debate instead of creating a ruckus. I wish God gives the Opposition parties good wisdom and they participate in the discussion for a productive session."

The business of both the Houses of the Parliament remained majorly disrupted since the commencement of the Monsoon session on July 19 due to the continuous ruckus created by the Opposition over the issues including farmers' protest, Pegasus spyware, COVID-19 and inflation.

So far, the Parliament has functioned only 18 hours out of the possible 107 hours. Around 89 hours of working time have been wasted. This means that the total loss to the taxpayers' money is more than Rs 133 crores, said sources.

The productivity of the Upper House fell drastically in the ongoing Monsoon Session of the Parliament as the Rajya Sabha Secretariat in an official notification informed that the House lost 40 out of 50 working hours during the first two weeks of the session. (ANI)