As many as 39 pilgrims have lost their lives en route since the commencement of the Chardham Yatra in Uttarakhand, as per an official on Monday. 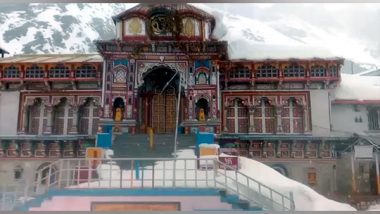 Dehradun (Uttarakhand) [India], May 16: As many as 39 pilgrims have lost their lives en route since the commencement of the Chardham Yatra in Uttarakhand, as per an official on Monday.

The official has presented high blood pressure, heart attack and mountain sickness as the reasons for the demise of the pilgrims.

"Most of the deaths of all the pilgrims have taken place on the travel routes. The cause of death of all has been high blood pressure, heart attack, and mountain sickness," Uttarakhand Director-General Health Dr Shailja Bhatt told ANI.

The health official informed that the health check-up of the pilgrims are being done at various places on the travel routes besides Rishikesh.

"Pilgrims who are not medically fit are being advised not to travel," she said.

Earlier last week, the DG informed that the health screening of the pilgrims now is being done at the points created on the travel routes.

Dr Shailja Bhatt informed, "Health screening of passengers has been started at Rishikesh ISBT registration site. A health screening camp has been set up at Pandukeshwar for the pilgrims of Dobata and Hina and Badrinath Dham on the Yatra route of Yamanotri and Gangotri respectively."

After the health screening, the passengers who are found to have any physical illness, are being advised to rest or go on the journey only after becoming fit for health, she said.

The yatra began with the opening of Gangotri and Yamunotri portals for devotees on May 3, on the occasion of Akshay Tritiya in the presence of Chief Minister Pushkar Singh Dhami. While Kedarnath re-opened on May 6, the doors of Badrinath opened on May 8. (ANI)