Get latest articles and stories on India at LatestLY. A key Congress panel at the party's Chintan Shivir here has favoured reservation in the private sector and has expressed support for demands for a caste census. 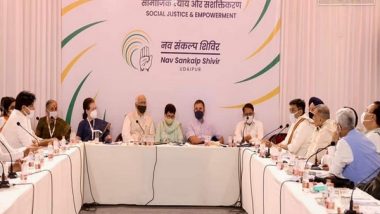 Udaipur (Rajasthan) [India], May 15 (ANI): A key Congress panel at the party's Chintan Shivir here has favoured reservation in the private sector and has expressed support for demands for a caste census.

It has also supported 'quota within quota' within the Women's Reservation Bill.

The party panel on social justice said it will recommend reserving 50 per cent seats at all levels within the organization for weaker sections including the Congress Working Committee.

It is also inclined to recommend reservations for OBCs in the assembly and the Parliament.

Congress leaders Salman Khurshid and K Raju told the media that organizational reforms are needed to reaffirm the message about the party's commitment to the welfare of SCs, STs, OBCs and minorities.

The recommendations of the panel will be considered by the Congress Working Committee before a final decision.

Raju said they had proposed creating a social justice advisory council to the Congress President.

"This council will closely examine what are all the social justice-related issues, the party has to focus on. What kind of policies we need to take, what kind of decisions we need to take in order to win the confidence of SCs, STs, OBCs and minorities," he said.

Raju said the Congress constitution now provides for 20 per cent reservation for the weaker sections.

"The group has discussed and decided that in the short run, we must step up this to 50 per cent reservation in all the Congress committees starting with booth committees, block committees, district committees, PCC and the CWC for SCs, STs, OBCs and minorities. There is a view from some of the participants that we need to go beyond 50 per cent also, but, the members felt that first let us step it up from 20 per cent to 50 per cent," he said.

He said the group has identified that there are many subcastes within the Scheduled Castes and Scheduled Tribes and the party needs to focus on them.

"There will be special attention to identify those sub-castes within these communities, who have not been adequately represented within the organization and also in the government," he said.

"We have also recommended that there shall be once in six months a special session of CWC, special meeting of PCCs, DCCs only to discuss, only to deliberate all the issues concerning the Scheduled Castes, Scheduled Tribes, OBCs and minorities so that party can always be allied with the issues and take decisions," he added.

The Congress leader said the group has deliberated at length on the issue relating to caste-based census of OBCs and all other communities.

"On this issue, the Congress Party has to take a stand. The group has strongly recommended that the party has to demand, has to express its commitment for the caste-based census because, in the year 2011 itself, the UPA government has taken up social-economic caste census," he said.

"So, we have now decided to take the stand that there shall be a caste-based census. The group has recommended central legislation on Schedule Caste sub plan and Tribal sub-plan. The group also recommended state-level legislation," he added.

Raju said one of the important policies the group has discussed and is in the process of recommending is reservations in the private sector for SCs, STs and OBCs because the jobs in the public sector are coming down.

Raju said the party should push for the pending women's reservation bill but "there should be quota within quota".

"There shall be proportionate representation for SCs, STs and OBC women," he said.

Khurshid said the panel tried to resolve every issue. "Naturally, our main focus is on the 2024 general elections. Our report will be submitted to the CWC tomorrow. We are very impressed with all the suggestions that are being given to us during group discussions," he said.

Answering a query related to videography survey Gyanvapi mosque, Khurshid referred to the Places of Worship Act 1991 and said the party has no second thoughts.

"It is the law of the land. It has been approved by the SC in the Ayodhya judgement itself and there is no reason for any departure from it. This was being very consciously done, keeping Ayodhya out of this legislation and ensuring that there will be total closure for all times to come, beyond that Ram Temple. We fully stand by that Legislature. We don't have any second thoughts," he said. (ANI)