Get latest articles and stories on India at LatestLY. Punjab chief minister Bhagwant Mann on Saturday asserted that a 'corruption-free administration' is the focal point of the ideology of the Aam Aadmi Party. 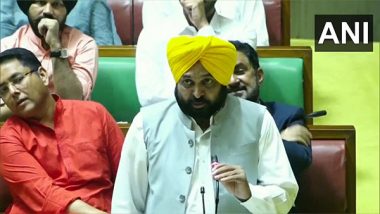 Chandigarh (Punjab) [India], June 25 (ANI): Punjab Chief Minister Bhagwant Mann on Saturday asserted that a 'corruption-free administration' is the focal point of the ideology of the Aam Aadmi Party.

"Now those who do corruption will not be saved nor hollow promises will be made. We have set an example with the 'One MLA-One Pension' step and the bill will be presented in this session itself. Corruption-free administration is the focal point of AAP's ideology," Mann said during the second day of the Budget session of the Punjab assembly.

Also Read | #MaharashtraPolitcalCrisis | Further, All the 16 MLAs to Whom the Disqualification Notice … – Latest Tweet by ANI.

Mann had announced the approval of 'one MLA, one pension' scheme on May 2, along with the announcement of 26,454 recruitments in various departments to provide employment opportunities in the state.

Notably, it was also declared that under this scheme, the Punjab government will not be paying the income tax of MLAs.

On the first day of the budget session, the Opposition attacked the Aam Admi Party (AAP) government on the issue of the murder of singer Sidhu Moose Wala. Leader of Opposition in the state Assembly Partap Singh Bajwa and Punjab Congress chief Amarinder Singh Raja Warring slammed the AAP government for lifting the security cover of Moose Wala.

They had alleged that the government lifted the security of the deceased singer despite threats to him.

Meanwhile, Punjab's Anti-Gangster Task Force on Thursday said that they have arrested one more accused in the Sidhu Moose Wala murder case.

The accused has close links with gangster Lawrence Bishnoi. With this, the number of total persons arrested so far in the case has now reached 13.

"Today, we have arrested Baldev aka Nikku who accompanied 'Kekda' in conducting recce for the crime. So far, 13 people arrested. Lawrence Bishnoi has revealed that planning for the murder started last year," said Anti-Gangster Task Force chief Pramod Ban.

"Baldev aka Nikku arrested today is a resident of Sirsa in Haryana. His work was to conduct recce and pass on information to the conspirators who were directly in touch with the shooters. He is named in many other previous cases," he added.

The court also allowed the Punjab Police transit application and directed Punjab Police to ensure that the medical examination of the accused Lawrence Bishnoi is conducted as per law/rules before leaving Delhi and also before his production before the concerned Court of CJM, Mansa, Punjab.

Sidhu Moose Wala was shot dead by unidentified assailants in Jawaharke village of Punjab's Mansa district on May 29. The incident took place a day after his security was withdrawn by the Punjab police among 424 others.

The Punjab Police had earlier told Patiala House Court of Delhi that the Gangster Lawrence Bishnoi is an accused in singer Sidhu Moose Wala's murder case. During the investigation of this case, it was revealed that Lawrence Bishnoi was a key conspirator and his custodial interrogation is necessary. (ANI)