Get latest articles and stories on India at LatestLY. Maharashtra Chief Minister Eknath Shinde along with his faction of MLAs have reached Mumbai from Goa where the rebel Shiv Sena legislators were camping after returning from Assam. 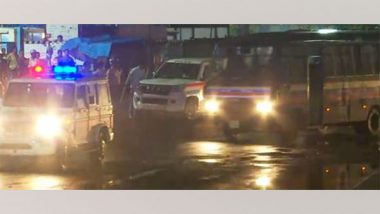 Panaji (Goa) [India], July 2 (ANI): Maharashtra Chief Minister Eknath Shinde along with his faction of MLAs have reached Mumbai from Goa where the rebel Shiv Sena legislators were camping after returning from Assam.

"In exercise of powers vested in me as Shiv Sena party president, I remove you from the post of Shiv Sena leader in the party organisation," Thackeray wrote in a letter addressed to the Maharashtra CM, who had led a faction of rebel Sena MLAs.

In a virtual address to the public yesterday, Thackeray said that if Union Home Minister Amit Shah had stuck to the original deal of making a Sena leader CM for 2.5 years there would have been no MVA and a BJP leader would have been Chief Minister today.

"About what happened yesterday, I had told Amit Shah earlier as well that there should be a Shiv Sena CM for 2.5 years (during Shiv Sena-BJP alliance). Had they done this earlier, there would've been no Maha Vikas Aghadi," he said.

Meanwhile, the BJP is preparing to ensure that its Colaba MLA Rahul Narvekar is chosen as Speaker of the Maharashtra Assembly in the election to be held on Sunday -- and official recognition is granted to the rebel Shiv Sena group led by Shinde ahead of the trust vote to be held a day later. The Maha Vikas Aghadi, meanwhile, has fielded Shiv Sena MLA Rajan Salvi. Eknath Shinde, who took oath as the chief minister of Maharashtra on Thursday, will have to prove his majority in the state Assembly on Monday. A special session of the Maharashtra Assembly will be held on 3 and 4 July.

Sources close to ANI mentioned that a special session of the Maharashtra Assembly is to be held on July 3 and 4. Maharashtra Governor Bhagat Singh Koshyari has asked CM Shinde to prove his majority on the floor of the House.

On June 20, Uddhav Thackeray was surprised when he realised that Eknath Shinde had flown to Surat in BJP-ruled Gujarat along with 11 MLAs. They were put up at the luxury hotel, which had turned into a fortress of sorts with nearly 400 policemen guarding it.

Amid growing speculation about the rebel camp's intentions, Shinde broke his silence and said that all the MLAs remained "staunch Shiv Sainiks" and "would never betray the ideals of Balasaheb" (the Shiv Sena supremo Bal Thackeray for power. Later, Shinde decided to shift its camp to Goa. (ANI)