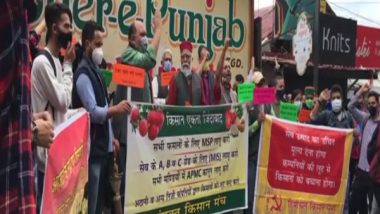 Visual of farmers protesting against falling prices of apples (Photo/ANI)

'Sanyukt Kisan Manch', a body representing over 20 farmer's organisations held the protest outside the office of the District Collector.

"on August 31, we were decided that if the government do not take any action on the falling prices of the apples within 10 days then we will protest. Hence, we are protesting today. We would be submitting our memorandum to the Deputy Commissioner. We are giving 15 more days to the government to consider our demands. If not considered we shall hold big Dharnas against the Jai Ram Government," said Kuldeep Singh Tanwar farmer's leader.

The protesting farmers claimed that the apple economy is shrinking in the state due to the market players having an impact on the market prices.

The farmers are also demanding the government to buy the crops of farmers on the same pattern as it is being bought in Jammu and Kashmir through NAFED (National Agriculture Cooperative Marketing Federation of India).

The 'Sanyukt Kisan Manch' has decided to conduct a 'bandh' on September 27, if the government do not take any action against the plummeting prices of the apples.

Himachal Pradesh has 80 per cent population dependent on farming and nearly lakh hectares are under crop cultivation and out of this 2 hundred thousand hectares land of fruit grove.

Apple crop occupies around 50 per cent (one lakh hectares) area of the state fruit groves. Himachal produces on an annual average 5.50 lakh metric ton apples, The economy of thousands of people is dependent hereon apples and their agriculture produce apple crop generates over Rs 4500 to 5000 crore revenue to the state.

The farmers have started protesting against the apple market prices which have been slashed down.