Get latest articles and stories on India at LatestLY. A 2.5-year-old female leopard was spotted in the Ashok Nagar area of Maharashtra's Nashik on Saturday morning. 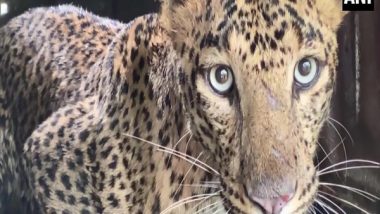 According to the Range Forest Officer of Nashik, the leopard was darted with a tranquillizer for rescuing him.

"A 2.5-year-old female leopard was spotted in Nashik's Ashok Nagar this morning. We immediately mobilized our rescue team. We took the help of a veterinary doctor and darted him with a tranquillizer. He would be released by the evening," Ketan Birari, RFO Nashik said.

Earlier on March 28, the officials of the forest department had informed about the rescue of a 10-day-old leopard cub found in the sugarcane field in the Dindori town of Nashik district.

"We safely reunited a 10-day old leopard cub with its mother. We found the leopard cub in a sugarcane field. The farmers working in the field informed us about the matter and they themselves tried to reunite them," Umesh Waware, Deputy Conservator of Forests had told ANI.

After getting the information, Dindori Forest Reserve officials installed CCTV cameras with the help of the Eco-Echo Foundation to capture the reunion of the mother and her child.

Further, Umesh Waware said, "We installed trap cameras with the help of the Eco-Echo Foundation and the cub was reunited successfully. The footage showed the moment mother carrying her leopard cup in the morning." (ANI)