"The way they are changing the names of places belonging to a particular community, it will make a dent to the spirit of brotherhood and affect communal harmony in the country. It will increase hatred. This is alarming. 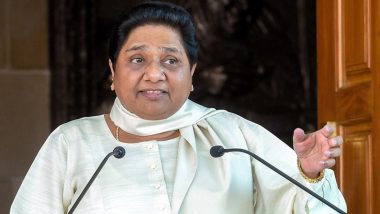 Lucknow, May 18: Amid the Gyanvapi mosque controversy, Bahujan Samaj Party (BSP) chief Mayawati on Wednesday said the government is targetting religious places and a particular community to divert people's attention from unemployment and skyrocketing inflation.

"Religious places here are being targeted by the BJP and its associates to divert attention from unemployment, skyrocketing inflation, and other issues. This is not hidden from anyone. The situation here can deteriorate any time", said Mayawati. According to the BSP chief, there is a conspiracy to provoke people on religious grounds.

"Years after independence, the manner in which religious sentiments of people are being instigated as part of a conspiracy, under the pretext of Gyanvapi, Mathura, Taj Mahal and other places, will not strengthen the country. The BJP needs to take note of it," added Mayawati, while addressing a press conference in Lucknow. She urged the people to be alert. Gyanvapi Mosque Row: Commission Seeks 2-day Time to Submit Survey Report Before Court.

"The way they are changing the names of places belonging to a particular community, it will make a dent to the spirit of brotherhood and affect communal harmony in the country. It will increase hatred. This is alarming.

People belonging to all communities must be on alert. This will neither do good to India nor to common people of the country," added the BSP chief. On Tuesday, Samajwadi Party (SP) chief Akhilesh Yadav slammed the Bharatiya Janata Party-led Centre, saying that Gynavapi-like incidents are a part of the party's "hate calendar", and are a deliberate attempt to avoid addressing issues of inflation and unemployment.

An application has been filed in Varanasi court to demolish the wall beside wazukhana where a Shivling is claimed to be found during the survey of the Gyanvapi Mosque premises, said lawyer Vishnu Shankar Jain, representing the Hindu side on Wednesday.